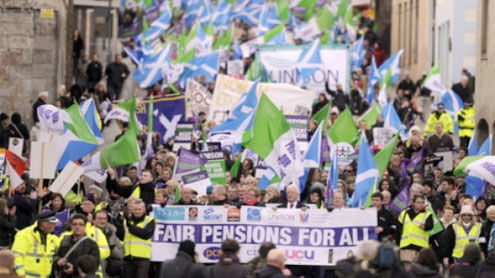 An estimated 400,000 public sector workers are expected to join a 24-hour strike in a dispute over proposed changes to pensions.

Airports, jobcentres, tax offices, colleges, driving test centres, museums and military sites will all face disruptions.Despite the action the Government made it clear in the Queen’s Speech that the changes would go ahead.Off-duty police officers, who are prohibited by law from striking, will be among the protesters, with up to 20,000 expected to march in Westminster. Unite assistant general secretary Gail Cartmail said: “Today’s industrial action will build on the high level of anger that was on display during the November 30 strikes.

“This anger has been increased by the Government’s hardline insistence that public sector employees work longer, pay more and receive less when they eventually retire.”Our members believe that the Government is attacking their pensions as a means of helping reduce the budget deficit, which has been caused by a greedy City elite, that has brought the economy to its knees. This is blatantly unfair.”The dispute over the planned changes to pensions, which would see increased contributions for workers, has been going on for more than 18 months and further strikes could take place in June and throughout the summer.

But ministers have insisted that negotiations with the unions will not be reopened.Cabinet Office minister Francis Maude said: “It is very disappointing that a handful of unions insist on carrying on with futile strike action which will benefit no one.”Public sector workers are being asked to work a bit longer and pay a bit more, but they will continue to get a guaranteed pension which is index-linked and inflation-proofed.”Most staff on low and middle incomes will receive a pension at retirement as good as what they expect today, and for many it will be even better.” – SKY