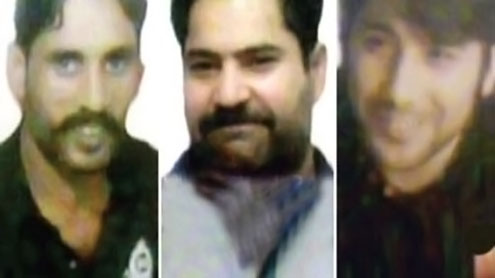 The deception of Indian intelligence agencies was exposed on Wednesday after Indian media reported that five suspected Lashkar-e-Tayyaba militants had sneaked into Mumbai through a sea route and were planning to target vital installations in the country’s commercial hub.

The Indian media also released photographs of the suspected militants only to be embarrassed by the fact that three of those being portrayed as terrorists turned out to be innocent Pakistani nationals who are very much present in Lahore and had come to know about the Indian claims through friends who saw their pictures being flashed on Indian TV channels and websites. The three men, Mehtab Butt, who owns a shop No. 26LG in Lahore’s Hafeez Centre; Atif Butt, who runs a mobile accessories shop in the same plaza; and Babar, a security guard at the plaza, rushed to the Liberty Police Station after hearing the news.

They told police that the Indian media was maliciously labeling them as terrorists, and sought a first information report against Indian authorities. The traders union of Hafeez Centre and citizens also announced to hold a protest against the incident.Only a day ago, US Secretary of State Hillary Clinton had called on Pakistan to “do more” against alleged militant safe havens in the country and against Lashkar-e-Tayyaba founder Hafiz Saeed. She made the statement during a three-day visit to India.This statement may have encouraged the Indian intelligence to prepare a ‘False-Flag’ attack similar to 26/11 to further their nefarious designs against Pakistan. – PT