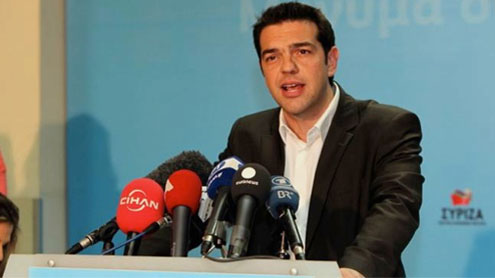 The leader of Greece’s left-wing Syriza bloc has said he will try to form a coalition based on tearing up the terms of the EU/IMF bailout deal.

Alexis Tsipras, whose bloc came second in Sunday’s vote, said Greek voters had “clearly nullified the loan agreement”.He has three days to reach a coalition deal and has told the two major parties to end their support for the austerity terms if they want to take part.The European Commission and Germany say countries must stick to budget cuts.European Commission President Jose Manuel Barroso said on Tuesday: “What member states have to do is be consistent, implementing the policies that they have agreed.”

But, after French voters chose a new president on Sunday in Francois Hollande who has advocated greater focus on growth, EU leaders are to gather on 23 May for an informal meeting at which his proposals will be discussed.German Chancellor Angela Merkel has written to Mr Hollande, saying that it is “up to us… to prepare our societies for the future and protect and advance prosperity in a sustainable way”.The financial chaos has sparked huge social unrest in Greece and led to a deep mistrust of the parties considered to be the architects of austerity.

On Monday the leader of the centre-right New Democracy (ND) party, Antonis Samaras, abandoned attempts to form a coalition.ND came first in the polls but, in common with the centre-left Pasok – the other traditional party of power – saw its share of the vote dramatically reduced.In March, both parties backed the terms of the second EU/IMF deal agreed by technocrat Prime Minister Lucas Papademos.In return for its two bailouts – worth a total of 240bn euros (£190bn; $310) – Greece agreed to make deep cuts to pensions and pay, raise taxes and slash thousands of public sector jobs.

Their votes drained away in Sunday’s elections in favour of smaller parties on the left and right, with Syriza picking up almost 17% of the vote. But because ND came first, it was awarded a 50-seat bonus in parliament according to Greek rules, and was initially asked to form a government.Twenty-four hours later it was Mr Tsipras who was given a mandate to form a coalition during a meeting with President Karolos Papoulias and immediately he began talks with prospective partners. Greek media said he had enlisted the support of a smaller left-wing party, Democratic Left, but had failed to persuade the communist KKE to back him. He is likely to talk to all the party leaders, except the ultra-nationalist Golden Dawn.

If the 38-year-old Syriza leader hopes to obtain the 151 seats needed for a majority in parliament, it is already clear he will need the backing of at least one of the two major parties.He told reporters “the pro-bailout parties no longer have a majority in parliament to vote in destructive measures for the Greek people” and urged them to write to the EU and IMF saying they were taking back earlier promises of co-operation made as a condition of the bailouts.

Mr Tsipras made his position clear to reporters in a five-point plan:

Under Greece’s current bailout plan, billions of euros in further austerity cuts will have to be found in June – and the country is also counting on a 30bn euro (£24bn; $39bn) instalment in EU/IMF funds. – BBC