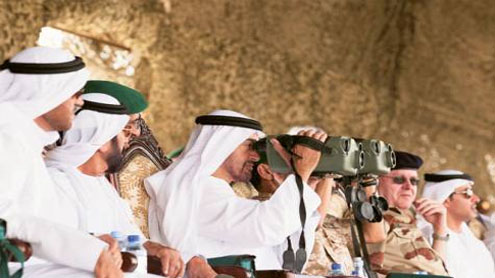 The UAE and France concluded on Wednesday two weeks of joint military exercises, showcasing the high competence and capabilities of the forces and their operational readiness.

The war games, held every four years, took place in the western Al Hamra desert region. The exercises were attended by General Shaikh Mohammad bin Zayed Al Nahyan, Crown Prince of Abu Dhabi and Deputy Supreme Commander of the UAE Armed Forces, who said qualitative training activities during Gulf 2012 would bolster the capabilities of different units to assume their national duties and remain ready at all the times to deal with any possible threats.

More than 4,500 troops — 1,800 of them from France — took part in the military exercises, which were previously held in 1996, 2000, 2005 and 2008. During the manoeuvres, troops simulated a war pitting the UAE and its ally against a state which has invaded the country. “We are able to work together (in the) air, land and sea and also have combined teams with Emirati and French officers and soldiers,” said Vice Admiral Marin Giller, commander of French forces during the war games. “It went very well.” – Kahleejnews