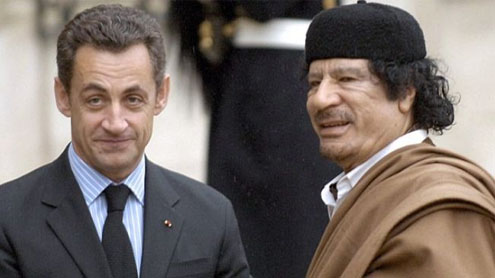 Nicolas Sarkozy was forced to deny allegations he had received 50 million euros from the late Muammar Gaddafi as France’s presidential rivals accused each other of dirty tricks a week before election day.

With the contest approaching its climax, Mr Sarkozy effectively accused his left wing rivals of orchestrating what he described as a “despicable forgery”.Amid mutual smear claims, Mr Sarkozy and François Hollande held giant rallies in Paris and Toulouse on Sunday ahead of a crunch two-and-a-half-hour televised debate on Wednesday. More than 20 million French are expected to tune in for the lone duel ahead of the May 6 runoff that Mr Hollande is polled to win by up to 10 percentage points.

On Saturday, the investigative news website Mediapart published what it said was a copy of a Libyan regime document proving that Mr Sarkozy and Col Gaddafi – onetime allies – had an illegal financial arrangement to help propel Mr Sarkozy to power in 2007.Written in Arabic and signed by Moussa Koussa, Col Gaddafi’s intelligence chief in 2006, it refers to an “agreement in principle to support the campaign for the candidate for the presidential elections, Nicolas Sarkozy, for a sum equivalent to 50 million euros.”

However, the memo’s supposed recipient – Bashir Saleh, Gaddafi’s former chief of staff and head of his sovereign wealth fund – yesterday denied receiving such a document. A lawyer for Mr Saleh, currently in exile in France, said he expressed his “grave reservations” over its authenticity. “It’s despicable. It’s a forgery,” an angry Mr Sarkozy insisted. “Mediapart is a habitual liar. It’s a shady agency in the service of the Left.”“Do you think that if Gaddafi had anything on me I would have tried to oust him?” he asked, referring to the French and British-led mission to depose him last year.The Socialists nevertheless called for a judicial investigation, saying: “Nicolas Sarkozy must explain himself before the French people.”

Mr Hollande was also forced onto the defensive yesterday however, over an embarrassing brush with Dominique Strauss-Kahn, the disgraced IMF chief and onetime Socialist presidential hopeful.On Saturday, Socialist lawmaker Julien Dray invited Mr Hollande’s campaign director Pierre Moscovici and other top team members to a drinks party to celebrate his birthday. Little did they know that Mr Strauss-Kahn was also invited to the event, held at a popular disco bar on the Rue St Denis in Paris – notorious for its prostitutes and sex clubs. Cleared of rape charges in the US, Mr Strauss-Kahn is under investigation in France for “aggravated pimping”.

The campaign team beat a hasty retreat when warned at the last minute that he was on the guest list, leading Mr Hollande to make a public declaration to quash controversy.“(Mr Strauss-Kahn) no longer has a role in political life and thus should not be part of a campaign nor in any images that could potentially lead people to believe he’s coming back,” he said.The Sarkozy’s camp – fighting an uphill battle to woo far-Right Front National voters ahead of Sunday’s vote – made hay of the near miss.“You couldn’t make it up,” said Nathalie Kosciusko-Morizet, Mr Sarkozy’s spokesman who this weekend said Mr Hollande “must have known” about his former party colleague’s allegedly illicit sexual practices.

Mr Hollande’s aides denounced that claim as “outrageous exploitation” of the case.Mr Strauss-Kahn hit the headlines on Friday in a report in which he is citing as claiming his arrest last year in New York on sex assault charges had been manipulated by operatives close to Mr Sarkozy to torpedo his presidential chances.Mr Sarkozy denied the claims, advising Mr Strauss-Kahn to “spare the French his remarks” and suggesting they were orchestrated by the Socialists “to create a distraction after the return to public life of Strauss-Kahn”. – Thetelegraph