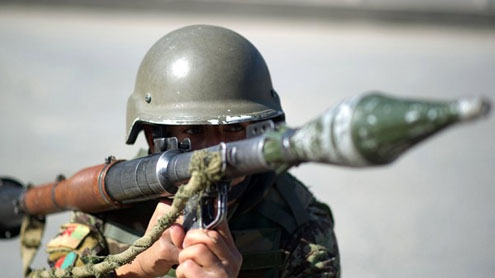 KABUL: Afghan president Hamid Karzai said on Monday that a coordinated Taliban attack showed a “failure” by Afghan intelligence and especially by Nato, as heavy street fighting between insurgents and security forces came to an end after 18 hours.

Battles which broke out at midday on Sunday gripped the city’s central districts through the night, with large explosions and gunfire lighting up alleys and streets.”The fact terrorists were able to enter Kabul and other provinces was an intelligence failure for us and especially for Nato,” Karzai’s office said.Karzai echoed his Western backers by praising Afghan security forces, saying they had proven their ability to defend their country – a task which will increasingly fall to them as foreign armies pullout from Afghanistan.

His office said 36 insurgents were killed in the attacks which paralysed Kabul’s government district, and which targeted three other provinces in what the Taliban called the start of a spring offensive. One fighter was captured.Eleven members of the Afghan security forces and four civilians were killed in the well-planned attacks in Kabul and the eastern Nangarhar, Logar and Paktia provinces.”In only a short time we managed to cut short their devilish plans,” said defence ministry chief of operations Afzal Aman. “They carried suicide vests, but managed to do nothing except be killed.”

The attacks were also another election-year setback in Afghanistan for US president Barack Obama, who wants to present the campaign against the Taliban as a success before the departure of most foreign combat troops by late 2014.Insurgents were killed attacking the Afghan parliament , and in a multi-storey building under construction that they had occupied to fire rocket-propelled grenades and rifles down on the heavily fortified diplomatic enclave.More were killed in Kabul’s east, and while attacking a Nato base in the eastern city of Jalalabad.

A militant arrested in the attacks on Kabul and three other cities has confessed that the assault was carried out by the Haqqani network, interior minister Besmillah Mohammadi said. “One terrorist who was arrested in Nangarhar province confessed, saying it was the Haqqani network that launched these attacks,” he said. The Haqqanis, led by Jalaluddin and his son Sirajuddin, operate in provinces along Afghanistan’s border with Pakistan. – TOI

Women too have high sex drive