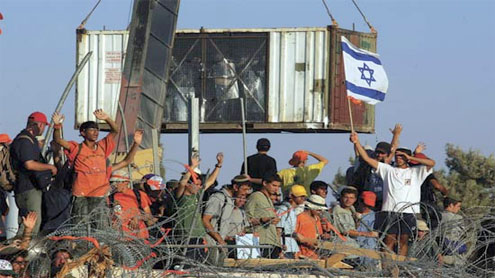 JERUSALEM: The Israeli military on Monday told a group of Jewish settlers to urgently vacate a building in a flashpoint West Bank city, setting up a fresh battle of wills over an attempt to extend an enclave built in an area Palestinians seek for a state.

About 20 settlers occupied the structure in the city of Hebron last Thursday, seeking to extend a settlement of about 500 families in the heart of a city that is mostly populated by Palestinians and is traditionally a flashpoint for Israeli-Palestinian violence.A military official said the settlers were told their presence at the site “amounts to illegal trespassing, which endangers the stability of the security situation in the area” and that they had until 1200 GMT on Tuesday to leave the building.Israel’s military authority said Israel had never authorised the settlement’s expansion.

Shlomo Levinger, a spokesman for the settlers, demanded Prime Minister Benjamin Netanyahu’s government “cancel this draconian order,” maintaining the building had been legally purchased.Danny Dayan, head of the settlers’ YESHA movement, denounced the order as a “travesty of justice”.Pro-settler cabinet ministers and lawmakers also objected to the eviction, which raises tensions with settlers just a week after Israel’s High Court angered them by setting an August 1 deadline for evacuating an unauthorised outpost called Migron.

The disputed Hebron building is named after a nearby holy site where Jews, Christians and Muslims believe the biblical patriarchs were buried.The United Nations deems all Jewish settlements in the region to be illegal, but Israel backs 120 of the enclaves, home to about 310,000 people.About 5,000 Israelis and 2.5 million Palestinians live in the West Bank and East Jerusalem, areas Israel captured from Jordan in the 1967 war. The Palestinians want the area for a state together with the geographically separate Gaza Strip.

Obesity, hormone use linked to cancer