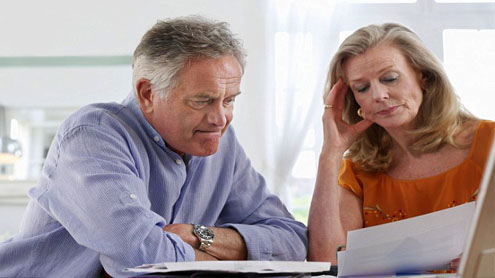 The Chancellor was accused of an “outrageous assault” on the over-65s after he used his Budget to announce that he would end a century-old tax break introduced by Winston Churchill.The “age-related allowance”, which means pensioners start paying tax at a higher income level than workers, is to be phased out, Mr Osborne said.

The move will mean prudent savers retiring in future will miss out on a tax break worth, on average, £285 a year, despite the Chancellor’s claims that the move would not leave pensioners poorer “in cash terms”. The move, instantly labelled a “granny tax”, will hit up to five million older people who will pay an extra £3.3billion in income tax over the next four years, according to Treasury figures. Mr Osborne described the removal of the tax break as a “simplification” that would be welcomed by pensioners who would not have to fill out tax forms. Many pensioners do not claim the extra relief.

The tax-free allowance is to increase for all taxpayers next year to £9,205, and ministers were thought to have concluded that an additional allowance for pensioners was no longer justifiable. Treasury aides admitted, however, that the decision was “controversial”.The tax changes for pensioners will be followed by a “simplification” in the state pension system. This will see every pensioner receiving a flat-rate payment of about £140 a week.

Although this is higher than the current basic state pension, better-off pensioners could lose their second state pension, leaving them hundreds of pounds a year worse off. Ros Altmann, the director-general of Saga, said: “This is an outrageous assault on decent middle-class pensioners.“This Budget contains an enormous stealth tax for older people. There is nothing in this Budget for savers, there is nothing to improve the annuity market, nothing to appease the damage of quantitative easing and nothing to support ISA changes and shelter older people’s cash. This Budget is terrible news for pensioners.”

The elderly have previously emerged relatively unscathed from the Government’s austerity drive. The Chancellor is understood to have decided that now was the time to remove some tax breaks from better-off pensioners, to help fund a giveaway for “working families”.The centrepiece of the Budget was the sharp increase in the tax-free personal allowance for workers, removing two million from paying income tax at all.

The £9,205 threshold from April next year will save every basic rate taxpayer about £250 a year, and every higher-rate taxpayer earning less than £100,000 about £140 a year. The increase was demanded publicly by Nick Clegg, the Deputy Prime Minister, earlier this year.In his 58-minute speech, Mr Osborne insisted that Britain had to “earn its way in the world”, pledging to stick to the Coalition’s commitment to reduce the deficit in the public finances, while unveiling a series of moves aimed at stimulating business.

At the heart of this was replacing the controversial 50p top rate of income tax with a new 45p levy from next year. An HM Revenue and Customs analysis found that the 50p rate had only raised about a third of what was expected and that a reduction to 45p would see revenues fall by only about £100 million.The Chancellor said: “This tax rate [50p] is the highest in the G20. It is higher not just than the tax rate of America but also of major European countries like France, Italy and Germany. It is widely acknowledged by business organisations and international observers as harming the British economy.”

He added: “No Chancellor can justify a tax rate that damages our economy and raises next to nothing.”The wealthy were targets, however, for a series of changes to stamp duty, which increased to 7 per cent on properties costing more than £2million. Mr Osborne also promised a further drive against “morally repugnant” tax avoidance which he said would raise five times as much money as the 50p income tax rate.

The Chancellor also set out plans for a form of the Liberal Democrats’ “tycoon tax” which will limit the amount of tax relief that millionaires can claim. One senior Liberal Democrat insider said: “This Budget is a great deal for millions of ordinary people. Nick Clegg has had a major influence and this is a very good day for us being in government.”Labour accused the Coalition of pandering to millionaires and hitting the elderly. Ed Miliband, the party’s leader, said: “After today’s Budget, millions will be paying more while millionaires pay less.” Other measures in the Budget included:

A watering down of plans to strip child benefit from higher-rate taxpayers. Only families with one person earning more than £50,000 will now lose the benefit, rather than £42,475 as previously proposed. Furthermore, it will be removed gradually from those earning between £50,000 and £60,000. However, the problem remains that a two-earner family, each with an income of £49,000 but a total household salary of £98,000, will keep the full benefit.

The rate of corporation tax will be cut quicker than expected to 24 per cent immediately before falling to 22 per cent by 2014. The Chancellor hopes to bring corporation tax rate down further to one of the most competitive levels in the world.A million more people will pay higher-rate tax in the next two years as the starting level for the levy is cut by £1,000. However, they will be better off overall because of the increase in the tax-free allowance.Fuel duty will increase by 3p per litre from August, despite record petrol prices. Company car drivers will also be hit with higher taxes.

A 37p increase in tax on a packet of cigarettes. Alcohol duties will rise by two per cent above inflation, as previously announced. Further sharp rises in the cost of alcoholic drinks are expected to be announced next week when the Government publishes its alcohol strategy.A tightening up of the VAT system to include levies on renovations of listed buildings, hot food sold by supermarkets and some caravans.An indication that the welfare budget will be cut by a further £10billion after the next election.

The Office for Budget Responsibility, the official economic watchdog, did not make major changes to economic forecasts that are published alongside the Budget. It predicted that the country would not slip back into recession this year and that economic growth would be slightly better than expected.Concluding his speech, Mr Osborne said: “Let us be resolved. No people will strive as the British will strive. No country will adapt as the British will adapt. No country will value those who work as we will value them.“Together, the British people will share in the effort and share the rewards. This country borrowed its way into trouble, now we’re going to earn our way out.” – Thetelegraph