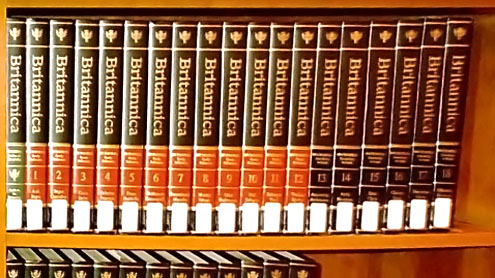 CHICAGO: Encyclopaedia Britannica Inc. said Tuesday that it will stop publishing print editions of its flagship encyclopedia for the first time since the sets were originally published more than 200 years ago.

The book-form of Encyclopaedia Britannica has been in print since it was first published in Edinburgh, Scotland, in 1768. It will stop being available when the current stock runs out, the company said. The Chicago-based company will continue to offer digital versions of the encyclopedia.Officials said the end of the printed, 32-volume set has been foreseen for some time.”This has nothing to do with Wikipedia or Google,” Encyclopaedia Britannica Inc. President Jorge Cauz said. “This has to do with the fact that now Britannica sells its digital products to a large number of people.”

The top year for the printed encyclopedia was 1990, when 120,000 sets were sold, Cauz said. That number fell to 40,000 just six years later in 1996, he said. The company started exploring digital publishing the 1970s. The first CD-ROM version was published in 1989 and a version went online in 1994.The final hardcover encyclopedia set is available for sale at Britannica’s website for $1,395.”The sales of printed encyclopedias have been negligible for several years,” Cauz said. “We knew this was going to come.”

The company plans to mark the end of the print version by making the contents of its website available free for one week, starting Tuesday.Online versions of the encyclopedia now serve more than 100 million people around the world, the company said, and are available on mobile devices. The encyclopedia has become increasingly social as well, Cauz said, because users can send comments to editors.”A printed encyclopedia is obsolete the minute that you print it,” Cauz said. “Whereas our online edition is updated continuously.”

Lynne Kobayashi of the Language, Literature & History section of the Hawaii State Library notes there will always be people who prefer using print sources over electronic sources. However, the proliferation of publishers of electronic databases has resulted in an audience becoming attuned to online searching.”There are many advantages to online searching, chief among them the ability to search within the text,” Kobayashi said. “The major disadvantage is the need for a computer or devices with access to the Internet.”

Kobayashi noted that whether she uses traditional methods in doing research or going online depends on the question she wants answered.”Sometimes subject knowledge and familiarity with standard resources may get faster results than keying in a search and sifting through results,” she said. “If the search is broader, searching across several online sources may yield more options.”

Britannica has thousands of experts’ contributors from around the world, including Nobel laureates and world leaders such as former President Bill Clinton and Archbishop Desmond Tutu. It also has a staff of more than 100 editors.”To me, the most important message is that the printed edition was not what made Britannica,” Cauz said.

“The most important thing about Britannica is that Britannica is relevant and vibrant because it brings scholarly knowledge to an editorial process to as many knowledge seekers as possible.”Kobayashi said as information professionals, librarians see an important part of their role as directing patrons to trustworthy information sources.”While Wikipedia has become ubiquitous, the Britannica remains a consistently more reliable source,” she said. – Yahoonews