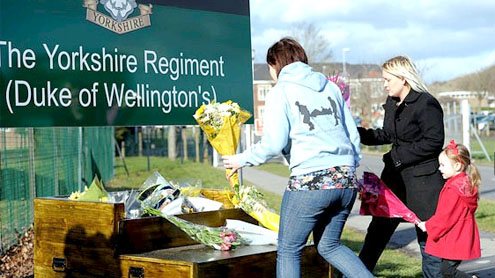 The fatalities took the British death toll in the decade-long war beyond the grim milestone of more than 400 killed on operations.

Questions have also been raised about the suitability of the flat-bottomed Warrior armoured vehicle after it was penetrated and set on fire by a bomb.But the device it triggered has been described as “enormous” and very difficult to survive in any vehicle.David Cameron, the Prime Minister, said: “This is a desperately sad day for our country and desperately sad of course for the families concerned.

“It is a reminder of the huge price that we are paying for the work we are doing in Afghanistan and the sacrifice that our troops have made and continue to make. “I do believe it’s important work for our national security right here at home but of course this work will increasingly be carried out by Afghan soldiers and we all want to see that transition take place.”

The six soldiers, five from the newly arrived 3rd Bn The Yorkshire Regiment and one from the 1st Bn the Duke of Lancaster’s Regiment, were driving in the desert at dusk when their vehicle hit the device. The size of the bomb threw the 40 ton Warrior onto its side and blew off its turret before 7pm local time on Tuesday near the Durai Junction. The vehicle then caught fire setting off ammunition inside and killing all six occupants.

It is understood the Warrior had been travelling parallel to the tarmac Highway One in Helmand province to avoid mines planted in culverts on the road.However the vehicle, followed by a second Warrior, might have been on a well established track that was deliberately targeted by the Taliban.The device was either an Improvised Explosive Device, weighing up to 100kg, or a stack of two or three anti-tank mines that the insurgents have in their armoury, according to military sources.It is also suggested that it might have been a “legacy” mine left over from the Soviet occupation that had been undiscovered until now.

However the mine was planted close to the Yakshal area, a Taliban stronghold in central Helmand.Despite receiving a £40 million upgrade, partly to strengthen its undercarriage, questions have been raised about the flat-bottomed Warrior’s ability to withstand IEDs. There have been 28 fatalities in Warriors since the 2003 Iraq invasion with up to a dozen destroyed.Four soldiers, including a friend of Prince William, were killed in a similar fashion in Basra, Iraq in 2007, an incident that led to the vehicles receiving enhanced armour.

But commanders insist it gives them good off-road manoeuvrability and heavy firepower aligned to excellent sights.The incident follows a year of relatively low casualties in Helmand including just one death last month.However the number of British death has now reached 404, with 399 coming since the Helmand operation began in 2006.Philip Hammond, the Defence Secretary, said: “I utterly condemn those responsible for this incident who will ultimately fail to derail a mission that is protecting our national security at home and making real progress in Helmand Province – a testament to the bravery, commitment and professionalism of our armed forces.” – Thetelegraph