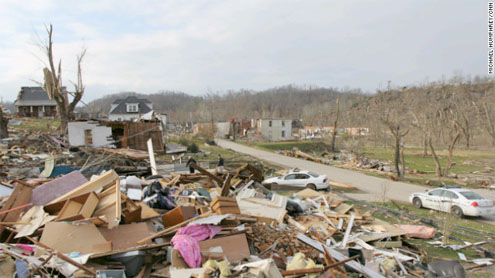 One tornado stayed on the ground for 95 miles as it tore through towns in Kentucky and West Virginia. Two other twisters left behind 49-mile paths of destruction.

The dynamically charged nature of Friday’s atmosphere created an ideal environment for producing long-track, devastating tornadoes, according to the National Weather Service.Officials from the weather service identified at least 45 separate tornadoes in last week’s deadly outbreak across the Midwest and South. The unusually severe storm system affected millions of people in 10 states, officials said.

Neighborhoods were flattened. Schools were in ruins. Dozens died.The strongest tornado appears to be the one that hit Henryville, Indiana, with maximum winds at 175 mph. That tornado stayed on the ground for 49 miles across Washington, Scott, Clark and Jefferson counties in Indiana and Trimble County in Kentucky.The twister rated EF-4 on the Enhanced Fujita scale, which weather service officials use to measure the intensity of tornadoes and the damage they are likely to cause.

In Henryville, a school bus hurtled into a restaurant.The walls of Stephanie Decker’s home crashed down. As she scrambled to protect her sons, the wreckage broke seven of her ribs and severed both of her legs.Woman loses legs in tornado while saving kids.Winds scattered Lori Lynch’s most treasured possessions. A woman found her high school diploma in Cincinnati — more than 100 miles away, CNN affiliate WAVE reported.

“In all the years I’ve been coroner, I’ve never seen bodies in the condition they’re in,” said Raymond Van Cleave, the coroner for Morgan County, Kentucky.Just 20 miles south of West Liberty, another long-track EF-3 tornado swept through Salyersville, Kentucky, packing 160 mph winds. That twister was also on the ground for 49 miles, with a 48-mile track through Kentucky and an additional mile into West Virginia, officials said.It struck a group of rescuers who were heading to West Liberty, throwing their truck across the street.

“It kept peppering us with debris and rocks and dirt and stuff. It was just something unreal. I’d never been through anything like that,” 1st Lt. Tommy Hereford told CNN affiliate WLEX.The 45 twisters confirmed by the weather service were among 144 reports of tornadoes, which may include multiple reports of the same tornado, in last week’s outbreak, which started Friday.

By the time calm returned Saturday, 41 were dead: 23 in Kentucky, 13 in Indiana, three in Ohio, and one each in Alabama and Georgia.Federal and local officials were still assessing the damage Wednesday.Less than 1% of the tornadoes that form each year reach EF-4 or EF-5 intensity, and few are on the ground for more than a few miles.

The tornado with the longest recorded path in U.S. history was the Tri-State Tornado of 1925, which was rated an F-5 on the Fujita scale — the previous model for tornado intensity — and was on the ground for 219 miles over a 3½-hour period. That twister still stands as the single deadliest tornado, responsible for 695 deaths when it tore through Missouri, Illinois and Indiana.The Joplin, Missouri, tornado on May 22, 2011, was the deadliest tornado the United States has seen in the last 60 years, with 161 dead.