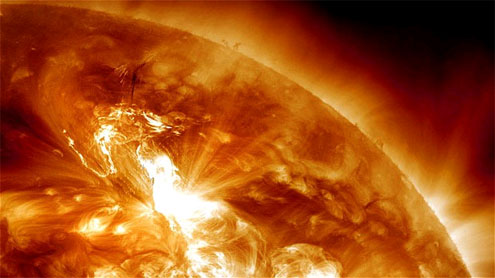 A massive solar flare will hit Earth on Thursday bringing with it the threat of power and GPS blackouts but also improving the chance of seeing the northern lights.

The burst of charged particles which has been released by the Sun and is rushing towards Earth is the biggest since August and comes as the Sun begins the most active stage of its 11-year cycle.Prior to the August flare, the Sun had not erupted with such magnitude since December 2006, before it entered a five-year period of relative calm.

The cloud of particles will begin reaching Earth at about midday on Thursday and should last until Friday but could be followed by further bursts, experts said.The charged particles, which will arrive at about four million miles per hour, have the potential to disrupt any magnetic, radio or radiation emissions.

This means they could trip out electrical power grids, wreak havoc with GPS systems and disrupt communication systems, putting flight schedules at risk. Solar flares also raise the chance of seeing auroras or Northern Lights which could appear as far south as Britain, although the full moon and light pollution in cities reduce the likelihood of one being seen.

Robert Massey, of the Royal Astronomical Society, said: “This probably will increase the chances of an aurora being visible in Britain – the bright moon might make it hard to see but if you live in the countryside it could be worth having a look.” – Thrtelegraph