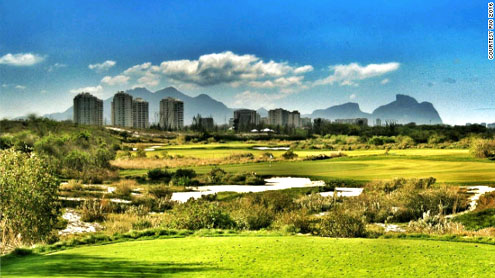 The organizers of the 2016 Olympics in Rio selected a U.S-based company Wednesday to design the golf course where the leading players in the world will battle for gold in four years time.

Hanse Golf Course Design beat off seven other challengers, including golf legends Jack Nicklaus, Gary Player and Greg Norman, to land the honor as the sport returns to the Olympic program for the first time in 112 years.The golf course will be built at Reserva de Marapendi in Barra da Tijuca, the district that will contain the largest number of Olympic venues. It is about five kilometres from the Athletes’ Village.

The Olympic golf competition will see medals awarded for men and women and the sport will also feature in the Paralympic Games in Rio. After the Games, the course will become a public facility to promote golf in Brazil.Gil Hanse, 48, is the president of the company he founded in 1993 and has its headquarters in Malvern, Pennsylvania.Blog: Why golf must get it right for 2016 Olympics.He will team up with LPGA star Amy Alcott, a five-time major winner, on the project and has also promised to relocate to the Brazilian city while the course is under construction.

“As it marks the return of golf to the Olympic Games after over a century of absence, this course represents the beginning of a new chapter in the history of the sport,” said Carlos Arthur Nuzman, the president of the Rio organizing committee.”It will enable Rio to host important events in the international calendar and it will be an example of sustainability and preservation of an environmentally protected area,” he added.Hanse was named “Architect of the Year” by Golf Magazine in 2009 and has been associated with a number of leading golf courses in the world, including Castle Stuart in Scotland.

Hanse has also been commissioned by American tycoon Donald Trump to re-work the famous ‘Blue Monster’ course at Doral, the venue for this week’s WGC-Cadillac Championships.Trump purchased the resort out of bankruptcy for $150 million last week.The design company of Martin Hawtree, the architect for Trump’s much-vaunted championship course at Menie in northern Scotland, was also among the disappointed bidders. – CNN