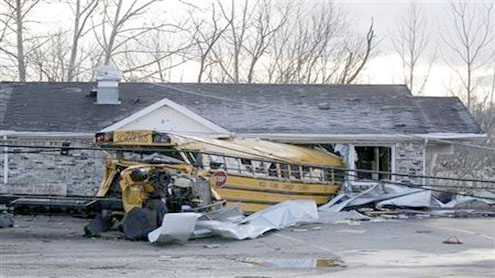 A winter snow storm added to the woes on Monday of tornado-struck Indiana and Kentucky, dropping several inches of snow on the ravaged region where dozens of people were killed, meteorologists said.

Overnight, three to five inches of snow fell in southern Indiana and north-central Kentucky, where recovery efforts were underway after Friday’s deadly twisters, the National Weather Service said.The fast-moving tornadoes, numbering at least 30, splintered blocks of homes and tossed around vehicles like toys.

Officials said the death toll was at least 39 — 21 in Kentucky, 13 in Indiana, three in Ohio and one in Alabama. Georgia also reported a storm-related death.One casualty was a toddler who survived a tornado in New Pekin, Indiana, and was found alive in a field. However, the 14-month-old girl died of her injuries Sunday. Her mother, father and two siblings also were killed.

In hard-hit West Liberty, Kentucky, the wet, heavy snow is contributing to the danger of more structural damage to buildings already weakened by the storm.The snow has already caused the collapse of 20-foot by 30-foot tent set up to serve meals to emergency workers and survivors. Kentucky Baptist Convention volunteers shifted meal service to a crowded community center.

The snow had started to melt by early afternoon, and the region will have a break from storms the remainder of the week to focus on clean-up, according to the National Weather Service.West Liberty’s main street was congested with emergency workers, insurance inspectors and security personnel Monday morning, as shop owners and employees tried to return to their stores to assess the damage.Among them were Linda Oakley, who along with her husband, Dale Oakley, accompanied firefighters into the storm-damaged All Occasion Flowers.

They used flashlights to survey the pitch-black store and found it a mess — water on the floor, insulation hanging from the ceiling and smashed pots. Mysteriously, some floral arrangements on light-weight shelves remained intact. Thomas, the store cat, was found alive, but he wouldn’t come out of his hiding place.”Anything we can do to get back to normal business, (residents) will see that as a reason to believe we can recover,” said Linda Oakley, an employee at the shop.

The region’s weather was clearing on Monday and the snow was melting as of Monday afternoon, giving workers some relief as they tackled the massive recovery effort.Like the interior of the flower shop, the homes of West Liberty showed the bizarre random nature of tornadoes — some destroyed, some untouched. In front of a West Liberty house that had been undamaged, children were building a snowman.Kentucky Governor Steve Beshear said on Sunday the storm had caused at least $5.8 million in property damage. He described the scene in West Liberty as “total devastation” and signed an executive order barring price gouging for food and other necessities.

Reports of looting began to surface late Friday, according to the Kentucky State Police, though the situation is now under control. As recently as Sunday afternoon, police stopped a vehicle on a back road that was trying to leave a home with a load full of stolen copper, said Albert Hale, the emergency manager for Laurel County.The opportunity for looters is clearly visible — even from a busy highway drivers can view destroyed homes where items such as televisions sit unattended. Hale estimated that seven miles worth of damaged homes need to be monitored. In hard-hit areas, officials stopped drivers to make sure they had a good reason to be in the area.

The extra security means Tracy Pitman in Laurel County, Kentucky does not have to worry about thieves while sitting in her small recreational vehicle with her grandson.For her, the bigger concern is planning the Wednesday funeral for her father-in-law and mother-in-law, both killed Friday during the storm. The family is planning to create a cemetery behind the spot where the family’s homes used to stand.”That’s the way our parents wanted it to be,” Pitman said. – Reuters

The violent storms raised fears that 2012 would be another bad year for tornadoes after 550 deaths in the United States were blamed on twisters last year, the deadliest year in nearly a century, according to the National Weather Service.AccuWeather.com reported that Friday’s storms may be one of the worst tornado outbreaks for early March on record, with 80 sightings between 10 a.m. and 9 p.m.March and April are typically busy months for tornadoes, and it is difficult to predict how bad the rest of the tornado season would be, according to Greg Carbin, warning coordination meteorologist, NOAA’s National Weather Service Storm Prediction Center.