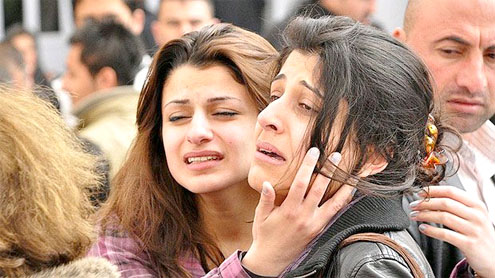 Iraq: An American gym teacher was killed Thursday when a student in the crowded classroom pulled out a gun, shot the teacher and then as his terrified classmates fled the room, shot himself, officials and eyewitnesses said.

The incident marked a rare violent death of an American in the relatively peaceful Kurdish region, which has been largely immune from the chaotic violence that has defined the rest of Iraq since the US invasion.The quarrel broke out Thursday morning at the Media School in Sulaimaniyah between the gym teacher and the student, identified as 18-year old Biyar Sarwar, said city police spokesman Sarkawit Mohammed. During the argument, Mohammed said, Sarwar shot the teacher with a gun he had hidden in his clothes.

Mohammed said Sarwar then shot himself, and died of the wounds later at a nearby hospital. Sulaimaniyah health director Retawit Hama Rashid confirmed Sarwar’s death.Eyewitnesses described a scene of chaos in the classroom.A student who said he was in the classroom when the argument broke out said Sarwar was sitting in the back of the room. The student, who would only identify himself by his first name, Ahmed, because police told him to not talk to reporters, said he ignored the argument at first because he was in the front of the room and could not hear it.

“Then I heard the gunshot,” said Ahmed, his face pale as he recounted the argument. “I turned my head and saw the body of the American teacher on the ground with blood near it. All the students started to run out of the room. Seconds later as I was running to the reach the school gate, I heard another gunshot.”Sulaimaniyah mayor Zana Hama Saleh confirmed the police account but declined to speculate on Sarwar’s motive.The Associated Press is withholding the gym teacher’s name pending notification of next of kin.

Sulaimaniyah is located in Iraq’s comparatively peaceful Kurdish region, 160 miles (260 kilometers) northeast of Baghdad. The Kurdish region has generally been free of the bombings and shootings that have plagued the rest of Iraq in recent years. Foreigners, including American citizens, usually travel freely around northern Iraq without the armed guards or armored vehicles often used in the rest of the country.

The attack came at the Media School, a private, Christian, English language-based academy that covers elementary through secondary grade levels. It runs schools in the three provinces that make up Iraq’s northern Kurdish region with a total enrollment of about 2,000 students.

According to the school’s website, American staff often help teach one or two courses each semester. An estimated 95 percent of the students come from Kurdish Muslim families, and the rest are described as either Orthodox or evangelical Christians or from other backgrounds.Many students are the children of local government officials and community leaders.The US Embassy in Baghdad has not yet confirmed the death.

“We have heard reports regarding the shooting of a teacher in Sulaimaniyah and are working through our consulate in Irbil and Iraqi authorities to ascertain the details of the incident,” the Embassy said in a statement. “At this time, we are waiting for identification to be completed and for the family to be notified. – Arabnews