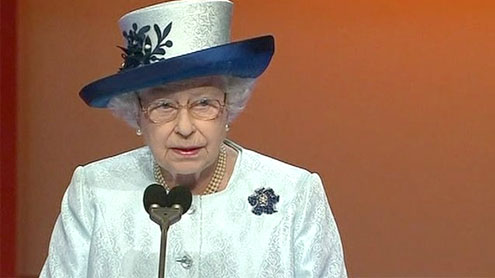 The monarch will open both the 2012 Olympics and the Paralympics this summer, signaling that both events will be celebrated as great state occasions — something the British are famous for. It is the first time the queen has opened the Paralympic Games.The monarch and her husband, Prince Philip, will perform the ceremonial role at the 80,000-seat Olympic Stadium when the Olympic games begin on July 27, and for the Paralympic Games that start Aug. 29.

The queen follows in the footsteps of her father, the late King George VI, who opened the 1948 London Olympics, and her great-grandfather, King Edward VII, who opened the 1908 London Olympics. The queen also opened the 1976 Olympics Games in Montreal, Canada, where she is the head of state, while Philip did so on her behalf at Melbourne, Australia, in 1956.The decision to open both ceremonies caps a very busy year for the queen, whose Diamond Jubilee this year marks her 60 years on the throne.

The queen, 85, and Philip, 90, are planning an extensive tour of the United Kingdom during the celebrations, including visits to Scotland, Wales and Northern Ireland. Philip is still planning to stick to the schedule despite his December heart scare, which required a stent to keep his coronary arteries open.At home, the Jubilee celebrations will include a flotilla on the River Thames, a gala concert in front of Buckingham Palace (with headliners including Paul McCartney and Elton John) and a carriage procession through the streets of London following a service of thanksgiving.

Unlike earlier Jubilee celebrations, the queen will send her children and grandchildren on official visits to many Commonwealth countries rather than undertake the strenuous voyages herself.She will be busy at the palace, though. The monarch will open Buckingham Palace to visitors from June 30-July 8 for the Jubilee. The palace will then close for a few weeks — until July 31 — before opening to the public as is the monarch’s usual summer practice.“It’s kind of an irony that we have such a big worldwide event right after the Diamond Jubilee,” said Joe Little, the managing editor of Majesty magazine. – Khaleejnews