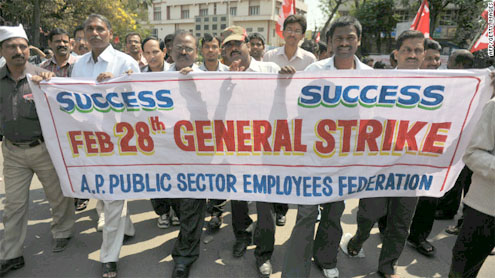 A one-day strike by India’s unions closed businesses and slowed public transit Tuesday as workers protested rising prices and what they say are the government’s anti-labor policies.

Most marketplaces in the state were also closed, Kerala police spokesman S. Sudhir said. Government offices were open, he added.Nationally, there was little impact on private services and there was no major disruption in rail services across the sprawling nation.Eleven trade unions called the one-day work stoppage, including a group affiliated with Prime Minister Manmohan Singh’s ruling Congress party. Singh’s government faced massive street protests last year over its handling of corruption as a raft of scandals rocked his administration, now in its second term.

Protesters are demanding social security coverage for workers in India’s massive informal labor sector, as well as an end to contract-based jobs.The unions also have warned the government against selling its stakes in state-run companies.”We demand the government come out with proposals in relation to our demands,” said G. Sanjeeva Reddy, president of the Indian National Trade Union Congress that is linked to Singh’s party.

The strike appeared to have little impact in bustling New Delhi.The city’s ubiquitous taxis and auto rickshaws largely stayed off the roads, but other vehicles still packed the streets.While markets in the city remained open, at least one branch of the State Bank of India in New Delhi was hit hard by the strike, with senior executives picking up the slack. Services appeared normal at private banks. – CCN