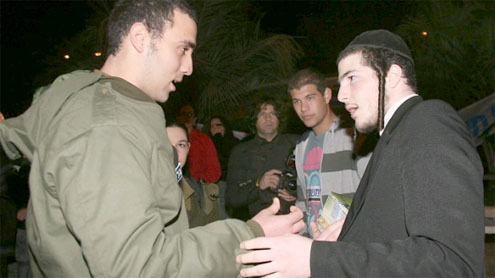 JERUSALEM: Ultra-Orthodox parties inside Israel’s government say they will oppose any new law that would apply Israel’s compulsory military draft to ultra-Orthodox men — a stance that bodes ill for the stability of Prime Minister Benjamin Netanyahu’s ruling coalition.

Last week, Israel’s Supreme Court overturned a law that has helped tens of thousands of religious men avoid military service and pursue state-sponsored religious studies instead. The privilege has created widespread resentment among Israel’s secular majority and encouraged ultra-Orthodox men to become lifelong students, reducing their large families to living off state handouts.With a July deadline looming, Netanyahu is now racing to find a new formula acceptable to the court and his coalition.

Netanyahu has promised to replace the so-called Tal Law with legislation that would allow “a much more equal sharing of the burden.” If no new law is on the books by the time the old one expires on July 31, universal conscription will presumably go into effect.Depending on both ultra-Orthodox and fiercely secular parties in his government, Netanyahu faces a difficult task drawing up a new system.In a rare show of unity, rival ultra-Orthodox parties met Sunday night to join ranks against any modifications that would expose their constituents to the draft. Israeli males perform three years of compulsory military service beginning at age 18.

Ultra-Orthodox religious leaders believe their followers must spend their days studying holy texts.“We have no existence without Torah,” the Haaretz newspaper quoted United Torah Judaism party lawmaker Moshe Gafni as saying, referring to the first five books of the Jewish bible. “We will give our lives for it.”Although Netanyahu’s coalition partners have stopped short of threatening to bolt, the court decision has threatened to shake up the prime minister’s government by forcing him to choose sides in this enormously divisive issue.

His foreign minister, Avigdor Lieberman of the secular Yisrael Beitenu Party, said Tuesday he would not agree to extend the old law. “Not by a day, and not even an hour,” said Lieberman, a critic of the religious exemptions.While Israel’s secular public has welcomed the prospect of ending the draft exemptions for the religious, actually conscripting them will be a difficult task.

The exemption, drawn up six decades ago to allow 400 exemplary seminary students to continue their studies, has ballooned to the point that tens of thousands of young men are now able to avoid the draft. Absorbing such a large number of conscripts, most of whom have few skills in the secular world, will be a challenge for the military.

Yohanan Plesner, a lawmaker who has chaired a subcommittee studying the matter, said Tuesday that the old law expires on July 31 and without new legislation, universal conscription would go into effect.“That’s not realistic or practical,” he said. “The military is not prepared for it … A different agreement must be made,” said Plesner, a member of the opposition Kadima Party.He vowed to prevent a new formula to allow mass draft dodging. “There should be no Tal Law Part 2,” he said. – Arabnews