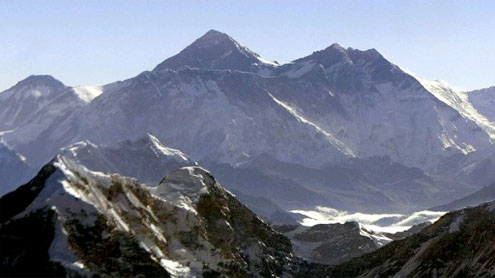 Nepal: Climate change is altering the face of the Himalayas, devastating farming communities and making Mount Everest increasingly treacherous to climb, some of the world’s top mountaineers have warned.

Apa Sherpa, the Nepali climber who has conquered Mount Everest a record 21 times, said he was disturbed by the lack of snow on the world’s highest peak, caused by rising temperatures.“In 1989 when I first climbed Everest there was a lot of snow and ice but now most of it has just become bare rock. That, as a result, is causing more rockfalls which is a danger to the climbers,” he told AFP.

“Also, climbing is becoming more difficult because when you are on a mountain you can wear crampons but it’s very dangerous and very slippery to walk on bare rock with crampons.”Speaking after completing the first third of a gruelling 1,700-kilometre (1,100-mile) trek across the Himalayas, Apa Sherpa would not rule out the possibility of Everest being unclimbable in the coming years.

“What will happen in the future I cannot say but this much I can say from my own experiences — it has changed a lot,” he said an an interview with AFP in the village of Gati, 16 kilometres from Nepal’s border with Tibet.The 51-year-old father-of-three, dubbed “Super Sherpa”, began his working life as a farmer but turned to the tourism industry and mountaineering after he lost all his possessions when a glacial lake burst in 1985.

He is on a 120-day walk dubbed the Climate Smart Celebrity Trek with another of the world’s top climbers, Nepali Dawa Steven Sherpa, with the pair expected to reach the finish on May 13.The expedition, the first official hike along the length of Nepal’s Great Himalayan Trail since it opened last year, will take in some of the world’s most rugged landscapes and see the duo ascending beyond 6,000 metres (19,600 feet).“I want to understand the impact of climate change on other people but also I’d like tourism to play a roll in changing their lives as it has changed mine,” said Apa Sherpa.

Research published by the Kathmandu-based International Centre for Integrated Mountain Development (ICIMOD) last year showed Nepal’s glaciers had shrunk by 21 percent over 30 years.A three-year research project led by ICIMOD showed 10 glaciers surveyed in the region all are shrinking, with a marked acceleration in loss of ice between 2002 and 2005.

Scientists say the effects of climate change could be devastating, as the Himalayas provide food and energy for 1.3 billion people living in downstream river basins.Environmental campaigners refer to the mountain range as the “third pole” and say the melting glaciers are the biggest potential contributors to rising sea levels after the North and South Poles.

Scientists blame confusion and scepticism over climate change on a blunder in a 2007 United Nations report which falsely claimed that the Himalayan glaciers would disappear by as soon as 2035.On the ground, however, mountain communities are already alarmed by dramatic shifts in weather patterns, two-time Everest summiteer Dawa Steven Sherpa told AFP as he and Apa completed the first 530 kilometres of their trek.

“Right from the beginning we saw the effects of climate change on tea plantations in Ilam district,” he said.“These areas would not normally get frost and it is destroying their entire crop. These are cash crops that employ thousands of people, even on one farm.“From what the local people are saying, it’s getting colder in the winter and hotter in the summer and it is the cold they are worried about.” – Khaleejnews