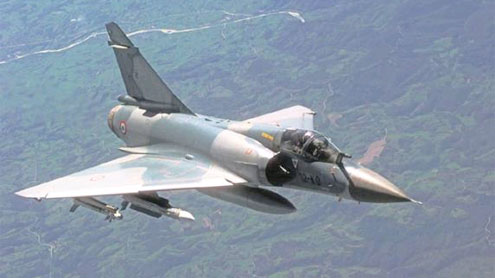 NEW DELHI: An IAF three-star general and a wing commander escaped unhurt when the multi-role Mirage-2000 fighter they were flying crashed after an engine problem in the Bhind region of Madhya Pradesh around noon on Friday.

Air Marshal Anil Chopra, among the first batch of IAF pilots to fly the single-engine Mirage-2000s on their induction from France in the mid-1980s, and Wing Commander Ram Kumar were on a “routine flying mission” when their fighter stalled during a climb soon after take-off from Gwalior airbase at 12.01 pm.”As per procedures, they tried to ‘re-light’ the engine but failed. The two then, around 12.09 pm, ejected safely while the jet crashed in the ravines. A court of inquiry has been ordered into the crash,” said an officer.

Posted as the air officer-in-charge of personnel at IAF HQ in New Delhi, Air Marshal Chopra was on an official tour to Gwalior airbase as the ‘commodore commandant’ of the No.1 Squadron (Tigers), which is headed by Wing Commander Kumar. IAF has two other Mirage squadrons, No.7 (Battle-Axes) and No.9 (Wolf Pack) at Gwalior.Air Marshal Chopra is the senior-most IAF officer to be involved in a crash in well over a decade. “He is a fully qualified Mirage pilot and fit to fly the jet. Senior officers do go on sorties once in a while. For instance, former chief Air Chief Marshal Fali Major used to often fly helicopters,” said an official.

The last time such a senior officer was involved in an emergency was in 2002 when the then Western Air Command chief Air Marshal V K Bhatia flying an AN-32 came under Pakistani fire when he inadvertently crossed the Line of Control. Though the aircraft took a missile hit, it landed safely back in Kargil area.Mirage-2000s have a much better flight safety record compared to others like MiGs and Jaguars. Only 10 of the over 60 Mirages procured by India have crashed since their induction began in the mid-1980s. Of them, four Mirages had crashed in close succession in late-2004.

The overall Mirage upgrade project cost will touch Rs 20,000 crore over the decade it will take to be completed, which has led to some criticism that it probably would have been better to go in for new fighters. IAF, however, swears by the Mirage-2000 fighters, which have had an excellent track record with the force. – TOI