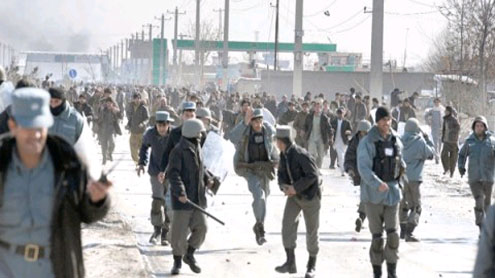 KABUL: At least eight Afghans were shot dead and dozens wounded Wednesday in clashes between police and demonstrators protesting over the burning of the Koran at a US-run military base, officials said.

In Kabul and in provinces to the east, north and south of the capital, furious Afghans took to the streets screaming “Death to America”, throwing rocks and setting fire to shops and vehicles as gunshots rang out. In the eastern city of Jalalabad, students set fire to an effigy of President Barack Obama, and the US embassy in Kabul went into lockdown.In Kabul, hundreds of people poured onto the Jalalabad road, throwing stones at US military base Camp Phoenix, where troops guarding the base fired into the air and black smoke rose from burning tyres, an AFP photographer said.

Afghanistan is a deeply religious country where slights against Islam have frequently provoked violent protests and Afghans were incensed that any Western troops could be so insensitive, 10 years after the 2001 US-led invasion. The US commander in Afghanistan, General John Allen, apologised and ordered an investigation into the incident, admitting that religious materials, including Korans “were inadvertently taken to an incineration facility”.

Allen and US deputy defence secretary Ashton Carter called on Afghan President Hamid Karzai Wednesday to apologise again for the incident at Bagram airbase north of Kabul, the president’s office said. Karzai asked Allen to cooperate fully with a government investigation into the burning and told him to “make sure that such incidents do not happen again in future”, a statement said. Karzai also urged the US military to speed up a transfer to Afghan control of the controversial US-controlled prison at Bagram, sometimes known as Afghanistan’s Guantanamo Bay.

“The sooner you do the transfer of the prison, the fewer problems and unfortunate incidents you will have,” the president told Carter. Two US officials, who spoke on condition of anonymity, told AFP the military removed Korans from the prison because inmates were suspected of using the holy book to pass messages to each other. Six protesters were killed and 13 wounded in Shinwar district of Parwan province north of Kabul, provincial administration spokeswoman Roshna Khalid told AFP, saying the protesters had attacked police with rocks and some were armed.

Kabul demonstrators attacked anti-riot police, forcing them to retreat and shots were fired as they tried to march on the centre of the capital, killing one person and wounding at least 11, according to a health ministry official. The demonstrators were driven back and the protest was over by mid-afternoon, witnesses said. About 100 university students demonstrated in west Kabul and dozens more people gathered at parliament until they were driven away by riot police.

“We are the protectors of the Koran, we want those who burnt the Koran to be handed over to us, we want justice,” said Rahim Shah outside parliament. In Jalalabad, more than 1,000 demonstrators, many of them university students, blocked the highway shouting “Death to Americans, Death to Obama”, while there were pockets of demonstrations across the city. – PT