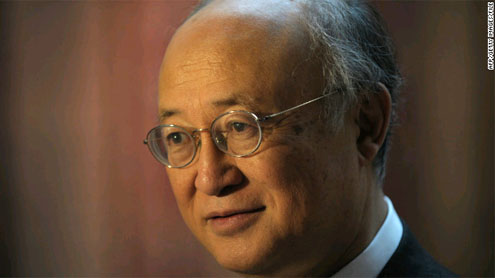 Two days of talks with Iran have failed to produce agreement on how to verify that Iran’s nuclear program remains peaceful, the International Atomic Energy Agency announced Tuesday.

Iran also refused to allow a team from the U.N. nuclear watchdog agency to visit its military base at Parchin, southeast of Tehran, during the two-day visit, the IAEA said.”Intensive efforts were made to reach agreement on a document facilitating the clarification of unresolved issues in connection with Iran’s nuclear program, particularly those relating to possible military dimensions,” an IAEA statement on the visit read. “Unfortunately, agreement was not reached on this document.”

The high-level team of experts was on its way back from Iran late Tuesday, the agency said. There was no immediate comment on its account from Iranian authorities.Iran says it is producing enriched uranium to fuel civilian power plants and has refused international demands to halt its production. But the IAEA reported in November that it had information to suggest Iran had carried out some weapons-related research.According to November’s IAEA report, Parchin may have been the site of tests of high explosives that could be used to detonate a nuclear bomb — experiments the agency called “strong indicators of possible weapon development.”

The talks come as Iran is under intense pressure to demonstrate that it has no intention of pursuing nuclear weapons. U.S. and European sanctions are crippling its currency, while a new round of sanctions are targeting its crude oil sales, which make up about half of Tehran’s revenue.In the meantime, Israel is making clear it is pondering an attack on Iran’s nuclear infrastructure. Israel is widely believed to have nuclear weapons itself, though it has never declared itself a nuclear power and considers Iran an existential threat.

Iran has threatened to cut off the Strait of Hormuz, the only shipping lane out of the oil-rich Persian Gulf, if it is attacked. But last week, it also proposed a resumption of long-stalled talks with European powers and Security Council permanent members aimed at resolving the issue. – CNN