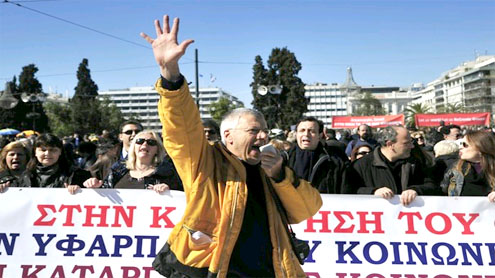 ATHENS: After months in which Greece teetered on the verge of bankruptcy, European officials agreed Tuesday to give the country a second massive bailout in exchange for harsh austerity measures, as grim new estimates about the country’s economy pushed off a resolution until what some officials called the last possible day to reach one.

The decision buys time for the Mediterranean country to try to fix its staggering problems, and gives assurances to the world that a Greek default — and its possibly disastrous ripple effects — will be forestalled, at least for now. If Greece had been cut loose, it would have defaulted in late March, and doubts about the viability of larger countries such as Spain and Italy might have grown.The euro jumped in value, surging 0.7 percent in minutes, to $1.328, as news of the accord emerged from the all-night meeting.

Under the terms of the deal, private bondholders will take a larger loss than had previously been planned in an attempt to get Greece’s debt to what European officials consider a sustainable level by 2020. The officials also agreed to reduce the interest they charge Greece for the long-term loans.But a recent European assessment about Greece’s finances left questions about whether the country would truly be able to live up to the stringent demands to which it has agreed, or whether it would default eventually even with a second bailout.

“We have reached a far-reaching agreement on Greece’s new program and private-sector involvement that will lead to a very significant debt reduction for Greece,” Luxembourg Prime Minister Jean-Claude Juncker, who heads the bloc of 17 countries that use the euro, told reporters in Brussels after a 14-hour negotiation. He called the amount of aid “unprecedented.”Greek officials said before the meeting that their country had done what had been asked of it.“Greece comes into today’s Eurogroup meeting having fulfilled all the requirements for the approval of the new program,” Greek Finance Minister Evangelos Venizelos said in a statement released after the Brussels meeting had begun. “The Greek people . . . will make the necessary sacrifices in order for our country to regain its place within the European family.”

Under the plans negotiated between the Greek government and European leaders, officials said Tuesday, Greece will receive a $172 billion bailout in exchange for taking harsh austerity measures that officials believe will make it more competitive. Greece will also write down 53.5 percent of the nominal face value of its privately held debt as a way of getting back on track by 2020.

The aid would come atop a previous bailout of $145 billion in May 2010, making Greece, a country of 11 million people that is just 2 percent of the euro zone’s economy, the recipient of by far the largest bailout in European Union history.Last week, Juncker vowed to spend his weekend doing everything he could to find ways to further cut Greece’s debt. But by Monday, it became clear just how short it would fall of its targets. – WP