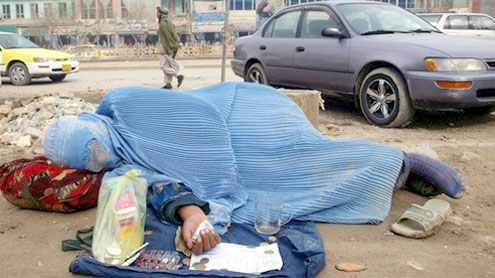 The government has recorded 41 deaths from freezing in three provinces — Kabul, Ghor and Badakhshan, said Health Ministry spokesman Ghulam Sakhi Kargar.All but three or four of those deaths were children, he said. Twenty-four of the deaths were in the capital of Kabul, mostly in camps for people who have fled fighting elsewhere in the country.

Kabul has been experiencing its worst cold snap and heaviest snowfall in 15 years, according to the National Weather Center. It said the weather was to improve by the end of the week.Heavy snowfall in Day Kundi province caused an avalanche late Sunday in the Sang-i-Takht district that damaged three dozen homes and shops. The avalanche caused no injuries, said Nasrullah Sadiqizada, a member of parliament from the central province.

The hardest-hit have been people living in tents in a number of camps around the capital. The deaths in these camps, so close to the offices of international organizations overseeing billions of dollars in aid to the country, have shocked many in Kabul.The UN and the US aid agency have started distributing extra blankets, tarps and fuel to people living in 40 camps throughout the city, the US Embassy said in a statement last week. Most of those in the camps have fled from Helmand and Kunduz provinces, though some are Afghans who have returned from years living in Iran and Pakistan to find themselves homeless, the statement said.

NATO also delivered an estimated 1,000 blankets, coats, socks, mittens and hats to a refugee camp in Kabul. The coalition said it was planning additional delivers within the next week.Kargar says the ministry is establishing mobile clinics to try to get help out to people suffering in the cold.The cold has also caused a spike in the price of gas and wood — the main fuel used by the city’s five million or so residents to heat their homes. Heavy snows also damaged high tension wires coming into the capital, causing sporadic blackouts in large swaths of Kabul. About 75 percent of the city has electricity.

Kabul city hall said the capital’s markets have supplies to last out the bad weather and there was no shortage of fire wood or food. Kabul Kahid Mohammad, director of Kabul markets, said main highways leading into the city were clear.Kabul airport was also operating, officials said, although there were delays at times due to poor visibility because of the snowfall. – Arabnews

Latest machinery and equipment on display at Machinex Arabia

Latest machinery and equipment on display at Machinex Arabia