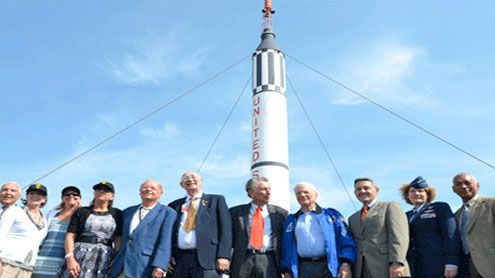 WASHINGTON: The United States marks the 50th anniversary on Monday of the first flight of an American into orbit.

But the historic landmark is bittersweet: the first nation to land people on the Moon now depends on Russia for its manned space flights.At 9:47 a.m. on February 20, 1962, on the eleventh try, astronaut John Glenn took off from Cape Canaveral aboard an Atlas rocket to make three orbits around the Earth in just under five hours.The flight followed by nearly a year the first manned trip into space by Soviet Yuri Gagarin.But it restored confidence in America’s ability to compete in the space race and made an overnight national hero out of Glenn.

Now 90 years old, Glenn has not forgotten the political implications of his mission.The Soviets “were claiming at that time they were technically superior and saying because their rockets were going and ours were blowing up on the launch pad too often that they had reached the point where they were as a society technically superior to us,” Glenn said Friday at a press conference at Cape Canaveral, Florida.”There was a lot more speculation about what role communism was going to play in the future of the world,” Glenn said. “And so it’s against that backdrop and those kinds of competitions of the Cold War that came some of the impetus for the Mercury program.”

Scott Carpenter, the second American to fly into space on May 24, 1962, said the first flights into orbit prepared the way for the first steps on the Moon by Americans seven years later, in July 1969.”These flights gave the nation the knowledge that although we we were behind the Soviet Union in our progress, that we were able to overtake them and do exactly what Kennedy told us to do and in so doing we would beat the Russians to the Moon and that’s what we did,” Carpenter said.The two retired astronauts expressed concern that the National Aeronautics and Space Administration (NASA) no longer has a manned space flight program after the last of the space shuttles was retired in July.

Instead, Americans flying to the International Space Station must hitch a ride on a Russian Soyuz spacecraft.”This cutting out the shuttle meant we have no (space) transportation system of our own to get to our own space station,” Glenn said. “And so now we have to contract with the Russians, unseemly though it may be for the world’s greatest space-faring nation.”Glenn, who served as a Democratic senator from 1974 through 1999, says the administration of former President George W. Bush sacrificed US space ambitions by cutting NASA’s funding.

“I think it’s too bad,” the former astronaut said. “I just hope some of the efforts now to recreate our own (space) transportation system come through.”NASA is depending on private enterprises to develop systems to replace the shuttle program, which is expected to happen in about five years.One of the companies, SpaceX, is scheduled to launch the first commercially built spacecraft to the International Space Station on March 20.As China plans manned flights to the Moon, Carpenter says he is concerned that Americans have “lost our national resolve.”

“When John and I went to work for this country in NASA, the United States was recognized around the world as a can-do nation, and because of all of these various reasons, we have become viewed around the planet as a can’t-do nation,” Carpenter said. “I deplore that.”

Asked whether he was frightened about his trip into space, Glenn said, “We were certainly aware that this was not the safest business to be in.”He said he put aside his personal fears to accomplish his space flight mission.”Well, it’s important for our country,” he said. “It was important because of the Cold War, it was a new step forward and we were proud to represent our country there. So you made it as safe as you possibly could, and what little bit of risk was left we accepted that.”