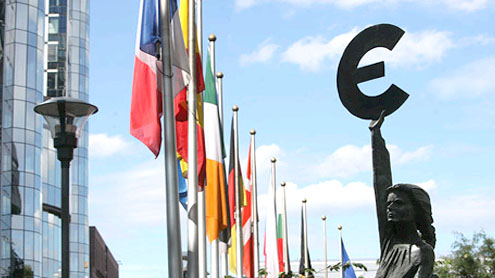 The European banks that are part of both reviews include Barclays (BCS), BNP Paribas, Deutsche Bank (DB), HSBC (HBC), the Royal Bank of Scotland and Societe Generale.The rating agency said actions reflect “the adverse and prolonged impact of the eurozone crisis, which makes the operating environment very difficult for European banks” as well as “the deteriorating creditworthiness” of eurozone countries.

The agency also said that banks and securities firms “with significant capital market activities” face “longer-term, substantial challenges.”Moody’s announced its review as European finance ministers haggle over the details of a second bailout for Greece, a decision that could come next week.5 ways to transform Greece’s economyThe rating agency said that Italy has the most financial institutions under review, with 24, with 21 more in Spain.

Other nations with banks under review are in France, the United Kingdom, Austria, Denmark, the Netherlands, Portugal, Germany, Sweden, Slovenia, Switzerland, Belgium, Finland, Luxembourg and Norway.Going forward, Moody’s said there is “little likelihood” that the situation will improve. The agency said the threat of downgrade would be removed from the banks only if the European economy strengthens, or the banks either reduce their exposure to risky assets, their use of wholesale funding or their capital market activities. – CNN