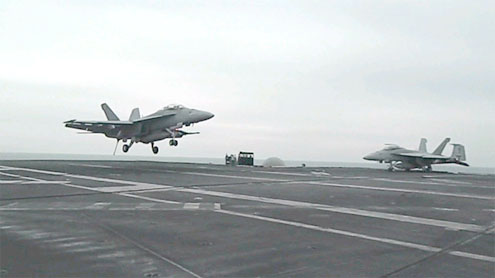 Breen’s squadron, the Blue Blasters, are currently stationed aboard the USS Abraham Lincoln, a huge aircraft carrier whose presence in the region is testament to the escalating tensions between the West and Iran.He says in almost all cases, the interaction between U.S. and Iranian pilots is professional — they stay out of each other’s way. But he also knows, the Abraham Lincoln is here to make sure the Iranians don’t overstep their boundaries.

“We have a responsibility to our coalition partners and to the world just to help make sure that freedom of navigation is going along smoothly and that people can feel safe transiting international waters,” Breen said during a recent CNN visit to the carrier.He is referring to Iran’s repeated threats to close the Strait of Hormuz as Tehran steps up its defiance in response to international sanctions. Any move to block the narrow waterway between Iran and Oman could affect 20% of the world’s oil supply including 90% of Iraq’s resurgent oil exports.

“We’ve heard the rhetoric about them possibly closing the Strait of Hormuz and we just remain vigilant as we come through,” said Rear Admiral Troy Shoemaker, who led a carrier strike group that this week escorted the Abraham Lincoln as the carrier on its second passage through the Strait this year.Shoemaker says his crew takes care not to provoke Iran through its maneuvering, but at the same is prepared to answer any military escalation by Iran’s navy. The U.S. believes any attempt by Iran to shut down the Hormuz waterway might involve missile or sea mine attacks on merchant vessels.

“It doesn’t take many mines to be effective, to have an effect,” Shoemaker said. “There is a potential to do that and we are prepared to monitor it and respond with capabilities that are in theater.”The U.S. Navy says it is ready to counter threats in the Persian Gulf. And aboard the Abraham Lincoln, the crew works round the clock to ensure the carrier is always capable of launching its aircraft. A massive arsenal stores millions of pounds of laser and GPS-guided ordnance. Several maintenance decks in the ship’s hull can conduct almost any maintenance required, from electronics to engine repairs.

A crew of the dozens of people needed to get a plane into the air are always on standby.Among these, the so-called “shooter” is in charge of operations on deck and gives the final go for the fighters to take off. Shooters are also responsible for monitoring the pressure of the massive steam-powered catapults that propel the planes from 0-160 miles an hour in about 2 seconds. Too much and the plane could get torn apart, too little and it would stall and crash into the water.

“We can launch four aircraft in about a minute, then we takes a few minutes to re load the catapults and get next batch of aircraft into position,” said Lt. Cmdr. Mike Givens, one of the shooters.Most crew members don’t talk directly about the potential Iranian threat in the region and will only say they are prepared to deal with anything that comes up.The commander of the USS Abraham Lincoln, Cpt. John D. Alexander, says the vast majority of encounters with the Iranian Navy are routine and professional, with ships or planes monitoring the carrier or trying to establish radio contact for routine queries.

Nevertheless, Iran’s fleet, though old and equipped with only small surface vessels and submarines, can pose a danger even to a super carrier.”They have small boats, they have bigger boats, they have submarines, they have pretty much the gambit of things,” Alexander says. The U.S. Navy speaks of scenarios in which Iran could launch sudden, almost insurgent style attacks on larger, better-equipped U.S. warships.So far, however, that has not happened and there were no major incidents during Abraham Lincoln’s recent passage through the Strait.The carrier is now on its way to new mission to support NATO forces in Afghanistan, but as international concerns over Iran persist, America’s presence in the Persian Gulf will remain. – BBC