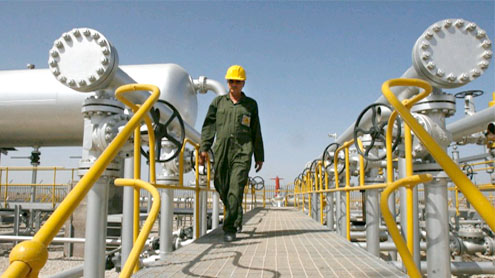 LONDON: Irans top oil buyers in Europe are making substantial cuts in supply months in advance of European Union sanctions, reducing flows to the continent in March by more than a third — or more than 300,000 barrels daily, industry sources said.

France’s Total has already stopped buying the crude, which is subject to European Union sanctions from July 1 and market sources say Royal Dutch Shell has scaled back sharply.Motor Oil Hellas of Greece was also thought to have cut out Iranian crude altogether and compatriot Hellenic Petroleum along with Spain’s Cepsa and Repsol were curbing imports.“We have significantly reduced our purchases because of the political situation,” said one customer, until now one of the larger EU buyers of Iranian crude.

“We are still lifting — but much, much less than two months ago.”For Iran’s smaller European customers, primarily in Italy, it was business as usual.Iran was supplying more than 700,000 barrels per day (bpd) to the EU plus Turkey in 2011, industry sources said, but by the start of this year imports had sunk to about 650,000 bpd as some customers cut back in anticipation of an EU ban.Of that volume, companies were cutting back at least a third voluntarily — starting with March shipments, according to industry sources and Reuters calculations.

Some trading sources said the self-imposed curbs will push out even more Iranian barrels, limiting Tehran’s flows to Europe to about 350,000 bpd from next month. Companies have cut back now because tighter sanctions from the West have made it much harder for them to finance their purchases. Flows from Iran could slow more over the coming months as transport and insurance become sticking points.The cuts meanwhile also offered a degree of protection for companies concerned that Tehran might preempt the EU ban and stop exporting to its customers in the West.

Total’s chief executive Christophe de Margerie said at the end of last month that the French major had stopped buying from Iran, but Shell has avoided public comment on its position. The Anglo-Dutch major is one of the biggest consumers of Iranian crude worldwide, industry sources said, taking around 100,000 bpd into Europe and about the same quantity into Asia under a deal with Japanese company Showa Shell that expires in March. Speaking on Feb. 2, when the company reported earnings, Shell Chief Executive Peter Voser declined to elaborate on how much Iranian crude the company was still buying.

“Shell will comply with the sanctions and we will therefore get our crude from somewhere else,” Voser said.Cepsa and Repsol declined to comment on their positions.Those that have reduced Iranian imports are filling the void with a range of replacement barrels from Saudi Arabia, Iraq and Russia.Saudi Arabia is prepared to supply extra oil either by topping up existing term contracts or by making rare spot market sales, oil executives said.

Some of the smaller buyers of Iranian crude, namely Italian companies, have not changed anything, so far.Italian oil firm Eni continued to receive one cargo of Iranian crude per month, a volume that has been stable for the last couple of years.The company expected this to continue after July 1 as it receives the oil as payment for work it has done in Iran under so called buyback deals more than a decade ago.

“At the moment, we are continuing as usual,” said a source familiar with the matter.“We have a lot of credit to recover.”Italian refiner Iplom also continued to buy Iranian crude, and the amount remained about one cargo a month, industry sources said.Oil traders said Iranian crude was relatively cheap compared with rival grades such as Russian Urals, an added bonus for those companies continuing to purchase it.Iran’s Oil Ministry is putting commercial considerations uppermost, industry officials said, disagreeing with calls from some Iranian politicians for Iran to stop selling its crude to the EU in relatiation for the sanctions.“We at the Ministry of Oil are fundamentally opposed to this,” said an Iranian oil executive. – Arabnews