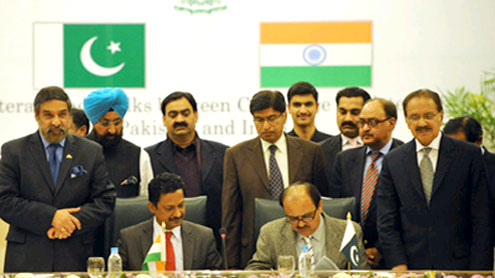 ISLAMABAD: Pakistan and India Wednesday signed three trade agreements with pledges to adhere to all the accords in letter and spirit and build bridges of understanding to lead the two countries towards prosperity and stability.

The two sides signed agreements including Customs Cooperation Agreement, Mutual Recognition Agreement and Redressal of Trade Grievances Agreement to build confidence of the business community on both the sides.The agreements were signed at the conclusion of bilateral trade talks between the Commerce Ministers of Pakistan and India.Through the implementation of these agreements, the two countries will systematically address the issues related to non- tariff barriers.

Addressing a press conference Minister for Commerce Makhdoom Amin Fahim flanked by his visiting Indian Counterpart Anand Sharma said that Pakistan and India after their deliberations have agreed to continue the process of the normalization of trade relations between the two countries.Indian Commerce Minister Anand Sharma said that India offers Pakistan a market of 1.2 billion people and both the countries can take benefit from each others’ opportunities.”We are here to build bridges between Pakistan and to India generate more resources”, Sharma remarked.

Both the sides also reiterated to adhere to the roadmap drawn up by the Commerce Secretaries for full normalization of trade relations.It has also been agreed that Pakistan will move from a Positive List to a small Negative List by February 2012 while the negative list is to be phased out and the timing for this will be announced in February at the time the list is notified. – Brecorder