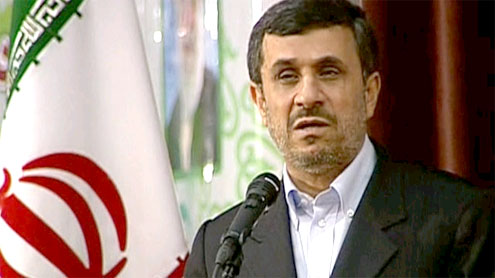 Iran has staged an elaborate ceremony to unveil new developments in its nuclear programme.

Tehran says it has used domestically-made nuclear fuel in a reactor for the first time, and also unveiled more efficient enrichment centrifuges.State TV showed President Mahmoud Ahmadinejad inspecting the rods as they were loaded into a reactor.Western countries fear Iran wants to make nuclear weapons; Tehran says it only wants to produce its own energy.The government unveiled the “new generation” of faster, more efficient uranium enrichment centrifuges at its Natanz facility in the centre of the country.

The head of Iran’s Atomic Energy Organisation, Fereydoon Abbasi Davani, said they were three times more efficient than their existing capacity.President Ahmadinejad was wearing a white coat at the research reactor in Tehran, and was also shown attending the ceremony to mark what he has called the great achievements in the nuclear sphere.He said last week that his country would never halt its programme to enrich uranium.In January, the International Atomic Energy Agency (IAEA) confirmed that Iran had started the production of uranium enriched up to 20% at its Qom plant.

A deal to provide fuel for the reactor from abroad collapsed two years ago – at which point Iran decided to make the fuel itself.One central point links these developments, says the BBC’s Iran correspondent James Reynolds: Iran is determined to show that it can master nuclear technology on its own, and that international sanctions against its nuclear programme will make no difference.The US and the European Union have recently imposed new sanctions targeting Iranian oil sales as part of a drive to increase international pressure on Tehran over its nuclear programme.

Meanwhile, Iran has written to EU foreign policy chief Catherine Ashton to offer to re-open talks with world powers on its nuclear programme.”We voice our readiness for dialogue on a spectrum of various issues which can provide ground for constructive and forward-looking cooperation,” the letter from chief Iranian nuclear negotiator Saeed Jalili said, according to AP news agency.The Obama administration dismissed the move as erratic behaviour resulting from the squeeze caused by sanctions. EU officials have not yet commented.Talks between Iran and six world powers – the US, UK, France, Germany, Russia and China – on Tehran’s nuclear programme collapsed a year ago. – BBC