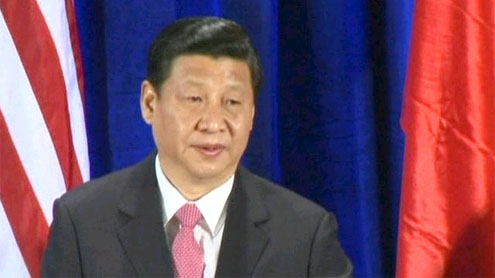 Chinese Vice-President Xi Jinping has called for deeper “strategic trust” in a speech to business leaders, on the second full day of his US visit.

Both countries should act to “reduce misunderstandings and suspicion” via closer communication, he said.Earlier, he met congressional leaders from the Senate and House of Representatives on Capitol Hill.Mr Xi is now travelling to Iowa, a state he visited on an earlier trip in 1985, before moving on to California.Correspondents say his visit is offering the US a glimpse at the style of the man tipped to be China’s next leader.

Speaking at an event hosted by the US-China Business Council and the National Council on US-China Relations, he called for closer communication and military-to-military exchanges.Relations between the two nations were at a “new historical starting point”, Mr Xi said, stressing that their intertwined interests were an “unstoppable river that keeps surging ahead”.In a reference to US calls for China to address trade imbalances, Mr Xi advocated that the US lift restrictions on Chinese imports.

He also signalled China’s willingness to engage with the US on foreign policy issues including Iran, counter-terrorism and the Korean peninsula.But the Chinese vice-president also called on the US to recognise China’s one-state policy, and oppose movements in Taiwan and Tibet for independence.”China welcomes the United States playing a constructive role in promoting the peace, stability and prosperity of the Asia-Pacific region,” Mr Xi said, referring to the US military’s recent “pivot” towards the region.”At the same time we hope the US side will truly respect the interests and concerns of countries in the region, including China.”

Early on Wednesday, Mr Xi met top leaders of the Senate – Majority Leader Harry Reid and Minority Leader Mitch McConnell – and Speaker of the House John Boehner.Correspondents warned the Chinese leader-in-waiting would face a lukewarm reception during closed-door meetings with congressional leaders.Congress has regularly called for China to change its approach to trade and its currency policy, which many US lawmakers view as an unfair promotion of domestic industry.Republican presidential contender Mitt Romney has repeatedly said on the primary campaign trail that he would direct the US Treasury to label the country a “currency manipulator” if he was elected president.

In Iowa, Mr Xi will revisit the family who hosted him in 1985 in the town of Muscatine.At that time, Mr Xi was a county official visiting the US as part of a Chinese delegation focusing on farm technology.The Chinese leader-in-waiting will also visit a farm in Iowa on Thursday.On Tuesday, top officials from the Obama administration pledged their commitment to a strong partnership with China, while admitting that significant policy differences remain.”We are not always going to see eye to eye,” Vice-President Joe Biden said during a meeting with Mr Xi.In a lengthy meeting with Mr Xi, President Barack Obama emphasised the need to maintain fair trade between the US and China.

The two economies remain heavily reliant on each other, but the US has said that China’s currency is kept pegged at a level that has hurt US growth and cost jobs.”We want to work with China to make sure that everybody is working by the same rules of the road when it comes to the world economic system,” Mr Obama said .”That includes ensuring that there is a balanced trading flow, not only between the United States and China, but around the world.”

The president touched on China’s human rights record, saying the US would support the aspirations and rights of all people. Mr Xi said China had made great strides, but admitted there was “room for improvement”.Mr Xi spoke of his desire to strengthen US-China relations, and build a “co-operative partnership based on mutual respect and mutual interests”.Mr Xi also attended a lunch at the state department and received a full honour guard when he met Defence Secretary Leon Panetta at the Pentagon. – BBC