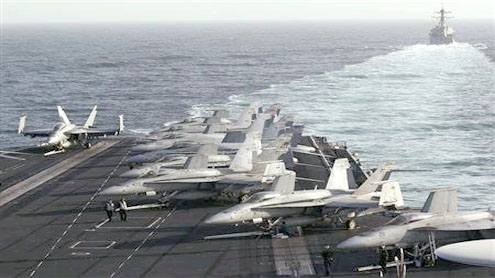 A U.S. aircraft carrier strike group sailed through the Strait of Hormuz Tuesday more than a month after Iran warned a different carrier — USS John C. Stennis — not to return to the Gulf as Iranian navy boats sailed by.

Iran has threatened to close the Strait of Hormuz, used for a third of the world’s seaborne oil trade, if Western moves to ban Iranian crude exports cripple its energy sector.Tuesday aircraft carrier USS Abraham Lincoln — part of the Bahrain-based U.S. Fifth Fleet — sailed through the strait of Hormuz with the Cape St George destroyer cruising behind.”If you listen to the (Iranian) rhetoric … you might think that there are some tensions,” Admiral Troy Shoemaker, commander of the carrier strike group nine, told Reuters.

“We obviously pay attention to that as we go through but I think we are conducting the transit as part of our normal business … Our intention is to keep it professional and routine.”Iran is at loggerheads with the West over its disputed uranium enrichment program. It says its nuclear program is for generating electricity.

The United States, like other Western countries, says it is prepared to talk to Iran but only if Tehran agrees to discuss halting its enrichment of uranium. Western officials say Iran has been asking for talks “without conditions” as a stalling tactic while refusing to put its nuclear program on the table.

The commander of U.S. naval forces in the Gulf region said Sunday Iran had built up its naval forces in the Gulf and prepared boats that could be used in suicide attacks, but the U.S. Navy could prevent it from blocking the Strait of Hormuz.Military experts say the U.S. Navy’s Fifth Fleet patrolling the Gulf – which always has at least one giant supercarrier accompanied by scores of jets and a fleet of frigates and destroyers – is overwhelmingly more powerful than Iran’s navy. – Yahoonews