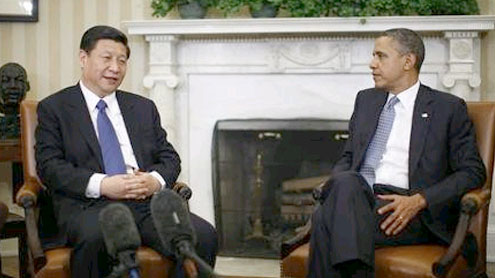 WASHINGTON: President Barack Obama told Chinese leader-in-waiting Xi Jinping on Tuesday that Beijing must play by the same trade rules as other major world powers and vowed to keep pressing China to clean up its human rights record.

In White House talks, Obama sought to reassure Xi that Washington welcomed China’s “peaceful rise.” But he signaled that frictions would remain, with growing economic and military rivalry between the two countries, and chided China over its opposition to U.N. action on Syria.The meeting with Obama was the centerpiece of a heavily scripted visit that could help the Chinese vice president boost his international standing and show he is capable of steering his country’s relationship with Washington for the next decade.

Obama’s firm message on trade, currency, human rights and global issues such as Syria was notable, given that the meetings were previewed as essentially sizing-up sessions.Obama has assumed a tougher tone with China in recent months, and is under election-year pressure from Republican presidential candidates, who say his approach has been too conciliatory.”With expanding power and prosperity also comes increased responsibilities,” Obama said as he sat side by side with Xi in the Oval Office.

“We want to work with China to make sure that everybody is working by the same rules of the road when it comes to the world economic system, and that includes ensuring that there is a balanced trade flow,” he said.But Xi, who has to play to a powerful Communist Party apparatus and nationalist sentiment at home, later told American business leaders that Beijing was acting on U.S. concerns but asked for similar consideration from the Obama administration.Obama pressed the Chinese leadership to let the value of the yuan rise and to do more to reduce the record $295.5 billion U.S. trade deficit with China — two issues fuelling concerns that Chinese practices are putting U.S. firms at a disadvantage.

But U.S. leverage over Beijing is limited, not least because China is America’s largest foreign creditor, and it remained unclear how much of Obama’s rhetoric was political posturing at a time when anti-China sentiment was high in the United States.China’s Vice Commerce Minister, Gao Hucheng, estimated that travelling Chinese trade and investment delegations would buy $27.1 billion of U.S. goods, including silicon chips, electronic materials, equipment and machinery, as well as farm produce.

Xi, 58, in line to assume the presidency in March 2013, said he looked forward to building a “cooperative partnership based on mutual respect” but did not address Obama’s criticism in their joint appearance before reporters. Each leader smiled and nodded as the other spoke and they shook hands.At a State Department lunch, Xi said the two sides must resolve economic disputes through dialogue, “not protectionism.”In a Chamber of Commerce speech, Xi stood his ground against U.S. complaints on trade imbalances and intellectual property, saying Beijing “has taken steps to address them.”

He countered U.S. trade concerns, by calling on the United States to address Chinese concerns on “lifting restrictions on high-tech exports to China and providing a level playing field for Chinese firms investing in America.”Although Obama’s aides see the visit yielding no breakthroughs, the United States and China agreed to talks on setting guidelines for export-credit financing, and China agreed to open up its auto insurance market to foreign competition.

Xi’s visit comes when ties between Beijing and Washington – the world’s two biggest economies – have been buffeted by strains over economic disputes, human rights and each country’s military intentions.”On critical issues like human rights we will continue to emphasize what we believe is the importance of recognizing the aspirations and rights of all people,” Obama said.Chinese leaders usually bristle at such public criticism as meddling in their affairs, and U.S. officials say Obama reserves stronger language for behind closed doors.

Xi cautioned U.S. leaders to avoid “further disturbance and damage” to relations in how they respond to sensitive issues like Taiwan and Tibet, according to the Xinhua news agency.Outside the White House, about 200 protesters decried China’s controls in the restive regions of Tibet and Xinjiang, its ban on the Falun Gong spiritual sect, and its rules banning most urban families from having more than one child.Obama chided Xi over China’s decision to join Russia in a veto of a U.N. Security Council resolution against Syrian leader Bashar al-Assad.

But Obama appears to have dealt more cautiously with the issue of Iran, thanking Beijing for helping to enforce sanctions on Tehran over its nuclear program. Washington hopes to coax China to wean itself off of Iranian oil.Speaking to reporters in Washington late on Tuesday, China’s Vice Foreign Minister Cui Tiankai warned that missteps by the U.N. Security Council could lead to more bloodshed in Syria. He also reiterated that U.S. sanctions on Iran should not affect Beijing’s “legitimate economic interests and energy needs.”

Xi is the highest-ranking Chinese official to visit since Obama launched a new U.S. “pivot” toward Asia in November to counterbalance China’s increasing assertiveness in the region.At the Pentagon, Defense Secretary Leon Panetta alluded to strained military-to-military ties as Washington reasserts itself in the Asia-Pacific region in the face of China’s buildup. Both men pledged to work to restore trust.It was still early morning in Beijing when Xi held talks in Washington, so it was unclear how fully the U.S. criticism about trade, human rights and Syria would be aired there.U.S. officials hope the talks will help them gauge the priorities Xi will pursue.

Xi is a Communist Party “princeling,” the son of a revolutionary leader, but also fond of Hollywood war dramas. he is less stiff in public than the man he will succeed as president, Hu Jintao, but his views remain largely opaque to policymakers in Washington.Xi’s tour will take him from Washington to a farm in Iowa to Los Angeles as he looks to ease Americans’ worries about China.