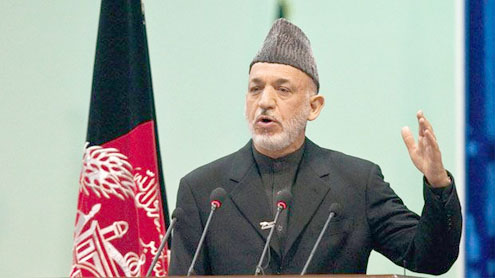 KABUL: Afghan President Hamid Karzai will press Pakistan to provide access to senior Afghan Taliban leaders when he visits Islamabad this week in a bid to advance a nascent peace process with the group, senior Afghan officials said on Tuesday.

Pakistan is seen as critical to efforts to reach a settlement to Afghanistan’s conflict, now in its eleventh year, and is believed to have influence over Afghan insurgent groups.“We hope that Pakistan will arrange a purposeful meeting between us and so that we find a solution to our own problems,” said one Afghan official, emphasising hopes of direct talks with Taliban leaders belonging so the Quetta Shura, named after the Pakistani city where it is said to be based.“Pakistan has paid little attention to our concerns and the level of cooperation has not been sincere or honest so far,” he complained.

Pakistan has consistently denied giving sanctuary to insurgents and denies the existence of any Quetta Shura.But Afghans have long been suspicious that Pakistan uses groups like the Afghan Taliban as proxies in Afghanistan to counter the growing influence of rival India.Ties between Pakistan and Afghanistan were strained for months after the assassination in September of Afghan peace envoy and former president Burhanuddin Rabbani.Afghan officials blamed Pakistan’s intelligence agency, allegations angrily denied by Islamabad.

But Pakistan Foreign Minister Hina Rabbani Khar said after a recent trip to Kabul that a lot of the ill will between the neighbours had faded, and she said Pakistan would encourage Afghan groups to pursue peace if asked by Kabul.Karzai’s spokesman Aimal Faizi said while relations between the neighbours in recent months had seen “ups and downs”, the trip was aimed at consolidating a recent improvement.Karzai is expected to meet Pakistan’s President Asif Ali Zardari during his visit which starts on Thursday.They are also due to hold talks on counter-terrorism and trade in a trilateral summit with Iranian President Mahmoud Ahmadinejad.

The Afghan Taliban announced last month it would open a political office in Qatar, suggesting the group may be willing to engage in negotiations that could likely give it government positions or official control over much of its historical southern heartland.While Afghanistan supports any talks that the Taliban may have with American officials in Qatar, it also wants countries like Pakistan and Saudi Arabia to play a role so that the process is comprehensive, analysts say.Karzai will meet Pakistan’s religious leaders and opposition figures in a bid to broaden support for fledgling talks with the Taliban, the senior Afghan officials said. – Thetribune