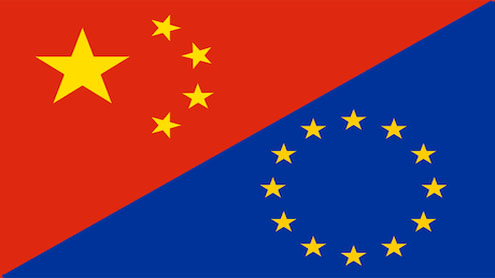 Leaders from China and the European Union are meeting for a summit set to focus on Europe’s debt crisis.

Premier Wen Jiabao is set to meet EU President Herman Van Rompuy and European Commission President Jose Manuel Barroso in Beijing.Syria and Iran may also be discussed plus the refusal by Chinese airlines to pay an EU tax.But the top topic is expected to be the financial crisis in Europe and how China might be able to help.”The debt issue is at a critical juncture,” foreign ministry spokesman Liu Weimin said on Monday.”We believe that as China’s largest trading partner and the largest economy in the world (collectively), it is important for the European Union to resolve this issue.”

The two EU leaders will also meet President Hu Jintao on Wednesday.They want Beijing to invest in a bail-out fund to help nations crippled by debt – something China has indicated it is considering.China’s foreign exchange reserves are the largest in the world.But Mr Liu said the EU needed to continue to make structural reforms to “give a clearer signal” to the international community.”Heavily indebted countries should, according to their national condition, adopt appropriate fiscal policies. The international community should continue to pro-actively support the EU’s efforts to deal with the crisis.”

In a commentary on Monday, Communist Party mouthpiece the People’s Daily said China’s interests lay in helping Europe – and sought to ease concerns over a wave of Chinese investment in Europe.”China not only does not have the appetite or ability to ‘buy out Europe’ or ‘control Europe’ like some in Europe have said, but also supports the euro and European Union from start to finish,” the daily said.The summit came as one of the main international credit agencies, Moody’s, downgraded its ratings for six European countries, including Italy, Portugal and Spain.

It also downgraded the credit outlook for France, Britain and Austria. Moody’s said the changes reflected Europe’s weak economic prospects and the uncertainty over the resources that will be made available to tackle the continent’s debt crisis.On Sunday, the Greek parliament approved tough new austerity measures.Greece is trying to secure a 130bn euro ($170bn; £110bn) bail-out from the EU and IMF to prevent it defaulting on its massive debts.The deal, which has not yet been finalised, could write off around half of Greece’s privately-held debt. – BBC

China’s Xi Jinping in closely-watched visit to the US

China's Xi Jinping in closely-watched visit to the US