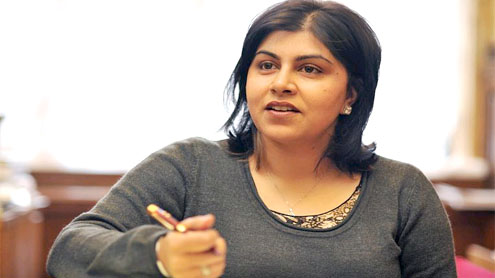 British society is under threat from the rising tide of “militant secularisation” reminiscent of “totalitarian regimes”, a Cabinet minister will warn on Tuesday.

In an historic visit to the Vatican, Baroness Warsi will express her “fear” about the marginalisation of religion throughout Britain and Europe, saying that faith needs “a seat at the table in public life”.In an article for The Daily Telegraph, the Cabinet Office minister says that to create a “more just society” Britons must “feel stronger in their religious identities”.

The minister, who is also chairman of the Conservative Party, says: “My fear today is that a militant secularisation is taking hold of our societies. We see it in any number of things: when signs of religion cannot be displayed or worn in government buildings; and where religion is sidelined, marginalised and downgraded in the public sphere.“For me, one of the most worrying aspects about this militant secularisation is that at its core and in its instincts it is deeply intolerant. It demonstrates similar traits to totalitarian regimes – denying people the right to a religious identity because they were frightened of the concept of multiple identities.”

Baroness Warsi leads an unprecedented government delegation to the Vatican where she will be received by Pope Benedict for a private audience on Wednesday. She will be the first foreign minister to deliver an address to the Pontifical Ecclesiastical Academy, which trains Papal diplomats, and the party will stay in the Santa Marta, an official residence in the Vatican for visiting cardinals.The visit, to mark the 30th anniversary of the re-establishment of full diplomatic ties between Britain and the Vatican, follows the Pope’s successful visit to Britain in 2010 when he is said to have been impressed by the Government’s outspoken defence of the importance of religion in public life.

The speech represents one of the most strident defences of the importance of religion by a serving British minister. It comes days after the High Court ruled that local councils could not hold prayers during meetings. There have also been recent cases of public sector workers being banned from displaying Christian symbols at work.David Cameron welcomed the visit. He said: “Our relationship with the Holy See is an important one and it speaks powerfully of the positive contribution faith can make to all societies.

“Sayeeda Warsi has consistently made the case for a deeper understanding of faith by the British Government so I am delighted that she will be taking this message to the Vatican personally.”In the speech, Baroness Warsi, the country’s first female Muslim Cabinet minister, is expected to draw strongly on her background to illustrate the importance of religion. She grew up in a Northern mill town where Christian values were important during her youth. The minister has decided to send her own daughter to a Christian school.

The Conservative chairman will say that Christianity is a vital part of British life and warns of the dangers of eroding its importance.“You cannot extract Christian foundations from the evolution of our nations any more than you can erase the spires from our landscape,” she will say in her speech.“I see a great danger to this confident affirmation of religion today. It is what the Holy Father called the ‘increasing marginalisation of religion’ during his speech in Westminster Hall. I see it in the United Kingdom and I see it in Europe. Spirituality, suppressed. Divinity, downgraded.

“Where, in the words of the Archbishop of Canterbury, faith is looked down as the hobby of ‘oddities, foreigners and minorities’. Where religion is dismissed as an eccentricity because it’s infused with tradition.”However, Baroness Warsi will call for a more robust discussion between people of different faiths. She says that faith has a “key role” in bridging divides. She will say: “Interfaith dialogue works when we debate our differences, when we wear our beliefs on our sleeves. It’s not about you giving your version of God, and me giving my version of God. And us coming to some watered-down compromise.”

In her speech, the peer will urge that European countries need to be “more confident” about the role of Christianity.“Our continent needs the zeal of a convert,” she will say. “Not from discovering something new but rediscovering something which has underpinned our civilisations for centuries.”Last year, the Prime Minister made a flagship speech on the importance of faith. However, the Archbishop of Canterbury has been highly critical of some aspects of Coalition policy, particularly government cuts, prompting criticism by some ministers.

In her article for The Daily Telegraph, Baroness Warsi makes it clear she is not calling for religious leaders to have the final say on government and social matters.She says: “I am not calling for some kind of 21st century theocracy. Religious faith and its followers do not have the only answer. There will be times when politicians and faith leaders will disagree. What is more, secularism is not intrinsically damaging. My concern is when secularisation is pushed to an extreme, when it requires the complete removal of faith from the public sphere.

“I am calling for a more open confidence in faith, where faith has a place at the table, though not an exclusive position.”Seven ministers including Jeremy Hunt, the Culture Secretary, Owen Paterson, the Northern Ireland Secretary and Michael Moore, the Scottish Secretary, travel to the Vatican on Tuesday. They will be joined by the Archbishop of Westminster. They will meet Holy See officials on Wednesday to discuss issues including human rights and international development.The delegation will then be received by Pope Benedict XVI — an honour not normally accorded those who are not heads of state or government. – Thetelegraph

China’s Xi Jinping in closely-watched visit to the US