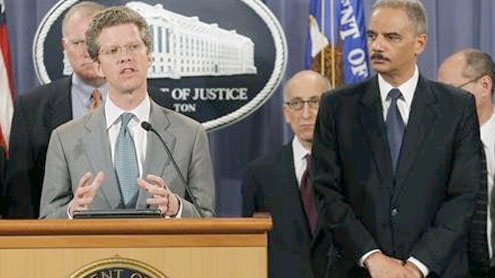 WASHINGTON: Five big U.S. banks accused of abusive mortgage practices have agreed to a $25 billion government settlement that may help roughly one million borrowers but is no magic bullet for the ailing housing market.

Thursday’s announcement brings an end to 16 months of negotiations that culminated in a tense week of round-the-clock dealmaking. The result is a record state-federal settlement that will deliver wide, but not deep, relief to U.S. homeowners.The deal, to be spread out over three years, requires the banks to cut mortgage debt amounts and extend $2,000 payments to borrowers who lost their homes to foreclosure.

But the banks still face a host of other potential government enforcement actions and investor lawsuits related to their packaging of home loans into securities, and other mortgage-related activities.”The bottom line about this settlement, is it’s okay, it’s a step forward, it’s a step in the right direction. But let’s not kid ourselves, there’s a hell of a lot more that needs to be done,” said Ira Rheingold, executive director of the National Association of Consumer Advocates.California, the state that has suffered around one-third of the country’s foreclosures in the past few years, will receive an outsized portion of the relief, some 45 percent, after its attorney general held out for a better deal.

And Bank of America, the bank with the most liability from the fallout of the housing crash, will pay the lion’s share of the settlement – $11.8 billion of it.Home values have dropped 33 percent from a 2006 peak that was fueled by generous loans, often to people with dubious credit records, and nearly 11 million Americans now owe more than their homes are worth.The housing settlement gives President Barack Obama, as he seeks re-election in November, a chance to show his administration is willing to get tough with big banks to help ordinary Americans survive the pain of the nation’s foreclosure crisis.

“We have reached a landmark settlement with the nation’s largest banks that will speed relief to the hardest hit homeowners in some of the most abusive practices of the mortgage industry and begin to turn the page on an era of recklessness that has left so much damage in its wake,” Obama told a news conference on Thursday.

The settlement is one piece of a larger package of relief efforts the administration hopes will boost the housing market, after prior programs to modify loans fell short of expectations.The deal with 49 states and federal agencies, including the U.S. Justice Department and the Department of Housing and Urban Development, is being billed as the largest federal-state settlement ever obtained.

The investigation started after evidence emerged late in 2010 that banks robo-signed thousands of foreclosure documents without properly reviewing paperwork.The five lenders involved in the deal serviced 56 percent of all loans last year, according to Inside Mortgage Finance data.Under the settlement, roughly 750,000 borrowers who lost their homes to foreclosure between 2008 and 2011 can expect to receive a $2,000 cash payment.The banks would also provide $17 billion in principal reduction and loan modifications for delinquent borrowers who are facing foreclosure.

The deal includes $3 billion to help borrowers who are current on their mortgage payments but unable to refinance because they owe more than their homes are worth.Further, banks agreed to new servicing standards, including stricter oversight of foreclosure processing and a single-point-of-contact for borrowers.

The program is designed to last for three years, but includes incentives for banks to provide relief within the first year.”The principal reduction helps stabilize the market a little bit, but not significantly,” said Brian Gardner, an analyst at Keefe, Bruyette & Woods Inc. “The monthly savings for those involved will be modest.”

The deal does little to ease investor fears over banks’ mortgage liabilities, industry analysts said.”We believe any initial euphoria over the deal will quickly fade as investors realize the flood of additional mortgage-related litigation that the major banks face,” said Guggenheim Partners analyst Jaret Seiberg in a note on Thursday.The settlement, that will be filed in federal court in coming weeks, resolves allegations of state and federal law including the use of robo-signed affidavits in foreclosure proceedings and deceptive practices in offering loan modifications.

It also covers claims the banks failed to offer alternatives before foreclosing on borrowers with federally insured mortgages, and filed improper documentation in federal bankruptcy court.In another component of the settlement, Bank of America will pay $1 billion to resolve a separate investigation into “fraudulent and wrongful conduct” by the bank and the Countrywide Financial unit it acquired in 2008.In addition, the Federal Reserve is imposing $766.5 million in penalties on the five banks as part of the settlement.

The agreement does not prevent the government from pursuing banks for wrongdoing related to the packaging of loans into securities, the target of a task force the Obama administration launched last month, and the subject of many investor lawsuits.The deal came together after core negotiators were able to win support from a handful of states, including California and New York, that had criticized earlier terms of the proposed deal as too lenient toward the banks.Attorneys general shepherding the deal, including Tom Miller from Iowa and Roy Cooper from North Carolina, holed up at National Association of Attorneys General offices in Washington this week as they worked to seal the settlement.

States with their own lawsuits and concerns pressed for special provisions in the deal, but by Wednesday afternoon, two key states – New York and California – fell in line. Officials worked until about 3 a.m. on Thursday, smoothing the way for holdouts Nevada, Massachusetts and Delaware to also join.

California Attorney General Kamala Harris had pulled out of the talks in September and said the deal under discussion failed to provide enough relief to her state’s homeowners.After round-the-clock negotiations over the past few weeks, Harris was able to extract narrow carveouts specific to the state’s laws and a guarantee that her state would receive a larger slice of the settlement, a lawyer in Harris’ office said.

California and Florida are the only two states to receive guaranteed benefits under the settlement, with California receiving $12 billion in principal reductions.New York Attorney General Eric Schneiderman had removed himself from the negotiations last year due to concerns the deal could release the banks for conduct that had not been investigated.On Thursday Schneiderman announced his support of the settlement. He said he will be able to continue a separate lawsuit against the banks for their use of the mortgage registry MERS in allegedly deceptive practices.

The lone holdout of the settlement, Oklahoma Attorney General Scott Pruitt, declined to sign the settlement and said he was concerned the settlement “greatly overreached” the authority of the states and could be unfair to homeowners who continued to pay their mortgage.He entered a separate $18.6 million deal with the five banks to receive his portion of funds from the settlement that go directly to the states. – Yahoonews

US Marines posed with Nazi symbol in Afghanistan

US Marines posed with Nazi symbol in Afghanistan