Elderly told: go back to work and downsize 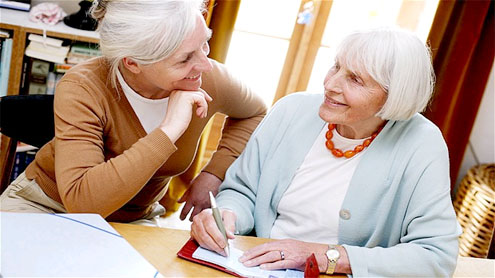 David Halpern, a senior No.10 aide, said loneliness was a “more powerful predictor” of whether a pensioner would be alive for more than a decade than whether they smoked.

He also suggested that elderly people who did not move to smaller homes were contributing to the shortage of housing in England.On an official visit to Sweden, the Prime Minister and some of his key advisers discussed radical plans on retirement with their Scandinavian counterparts.Mr Cameron said he supported plans to increase the retirement age in line with life expectancy which could see workers remaining in employment until well into their seventies.

Evidence is now emerging of the dangers associated with elderly people becoming lonely and isolated after retiring. The increase in the retirement age could lead to a wider change, under plans set out by Mr Halpern, the director of the No 10 Behavioural Insight Team, known as the “nudge unit”.He heads the government team which has the task of developing ways to change people’s behaviour that do not require legislation or other heavy-handed actions from the state.In a presentation, Mr Halpern said pensioners should be encouraged to return to work because of the benefits of social interaction for the elderly.

He told delegates at the Stockholm summit that more than half of those older than 75 in Britain described themselves as lonely “all or most of the time”.“Work matters, particularly for older people, not just for money, but absolutely for social contact,” he said.Mr Halpern presented a graph showing the links between health and a variety of lifestyle factors.“We know smoking is really bad for you,” he said. “But much worse are things like social relationships.“If you have got someone who loves you, someone you can talk to if you have got a problem, that is a more powerful predictor of whether you will be alive in 10 years, certainly more than smoking.”

Mr Halpern said Britain faced a shortage of housing, partly because elderly people remained in family homes after their children left.“A big issue we have is under-occupation of houses,” he said. “We have more TVs than people in the house.”A report last year suggested there were 25 million empty bedrooms in the country. Ministers were urged to draw up proposals to encourage elderly couples to downsize and create more affordable family homes.The Government has recently backed council schemes that help pensioners move into smaller properties and rent out their family homes.

The summit yesterday was aimed at producing ideas to help elderly people remain in the workforce for longer, as well as promoting the role of women in business. Mr Cameron, along with the leaders of eight Nordic and Baltic countries, wrote a joint essay setting out the economic “burden” ageing populations are creating.“A smaller number of young people working and paying taxes will be expected to support a growing number of older people,” they wrote. “Experience shows that apart from increasing the pension age, older people can be encouraged to stay longer in the workforce. This is something that many older people welcome, especially as health is no longer a problem for many persons even in their 70s.

“It is rather a question of changing attitudes and norms of people in other age groups in society.”Mr Cameron said Britain could introduce a scheme to link increases in the pension age to life expectancy.The state pension age is already due to increase from 65 to 68 over the next three decades. The automatic “life expectancy based adjustment” could see it increase to 70 by 2060.Asked about the scheme, the Prime Minister said: “I love the idea.”

On the eve of the summit, Fredrik Reinfeldt, the Swedish prime minister, said that by focusing on giving the elderly more opportunities to work rather than retire, Europe could better fight off economic competition from emerging markets such as China and India. He said people should work until they are 75 rather than expect to retire at 65, sparking a furore in a country that prides itself on its “cradle to grave” welfare system.In response to the plan, Mr Cameron said: “I don’t think anyone is saying: ‘You must work until you’re 75’. What we are all saying is that we need flexibility, we need to have a system that allows people greater choices, greater chances.

“Many people in Britain choose to work past their retirement, not least because they are able to take their pension and work. No one is talking about people who do hard manual labour continuing in those jobs year after year but we should give people better chances and choices to retrain and do different things.”The Prime Minister also suggested there was a growing “apartheid” between workers retiring from private and public sector jobs. He said: “We have this problem with the public sector pensions system where you have got a lot of resistance to changing public sector pensions, some of which have very low retirement ages.

“We could end up with quite an apartheid system where people in the private sector have this flexible ethic, they go on working.“But in the public sector, we have quite a cut-off and a very expensive public sector pensions system.”Ros Altmann, the director general of the Saga over-50s group, said: “It’s outrageous social engineering for the government to suggest older people don’t deserve to live in their own homes. We need to be careful in raising the pension age to recognise there are differences in life expectancy across the country.” – Yahoonews

Iran turns to barter for food as sanctions cripple imports