US Marines ‘will be moved from Japan’s Okinawa’ 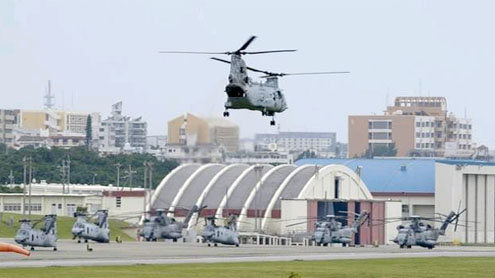 The US and Japan have resurrected a controversial deal to move thousands of US Marines from the island of Okinawa.

Japan has been unable to fulfil a condition of the original deal, signed in 2006, that a US airbase on the island must be relocated before the troops are redeployed.But the two sides said in a statement before a new round of talks that they had agreed to “de-link” the two issues.The Futenma base, near Naha city, has soured ties between the two allies.Locals say having a military facility so near the city is dangerous and noisy, and want it removed from the island altogether.Occasional well-publicised instances of bad behaviour and criminality by US personnel have fuelled the concerns.

Former Prime Minister Yukio Hatoyama promised to shift the base off the island, but he resigned in 2010 when he failed to get agreement on another location.The US has some 18,000 marines on Okinawa out of a total military deployment of about 50,000 in Japan.Under the 2006 agreement, the US said it would move 8,000 marines to Guam once Futenma was shut down, leaving 10,000 on Okinawa.That deal stalled amid local protests at the possible sites for relocation of the base.In a statement released by the state department at the start of talks on Wednesday, the two sides said the movement of personnel would be “de-linked” to the relocation of the Futenma base.

The statement gave no figures on the number of marines to be pulled out, but suggested the overall level would be the same as the 2006 agreement.Japanese newspaper reports suggested some 4,700 Marines would be moved to Guam, and 3,300 would rotate through bases elsewhere in the Pacific.In the statement, the two sides said they still agreed that Futenma should be relocated to Camp Schwab, in a sparsely populated area miles north of Naha, in line with the 2006 deal.

Japanese Foreign Minister Koichiro Gemba told a news conference: “Rather than choosing an option where nothing moves forward, I took a step, under Prime Minister [Yoshihiko] Noda’s guidance, to first realise the reduction of burden on people in Okinawa.”But Okinawa Governor Hirokazu Nakaima said even plans to close the base and move the remaining US personnel to a new location were unacceptable.”A relocation without local consent would be impossible. We want Futenma moved out of Okinawa,” the Associated Press reported him as saying. – BBC