by ToP
in Europe, International News
3 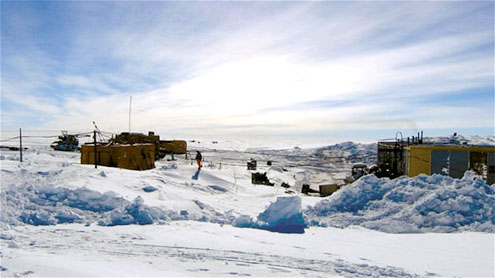 Russian scientists are reporting success in their quest to drill into Lake Vostok, a huge body of liquid water buried under the Antarctic ice.

It is the first time such a breakthrough has been made into one of the more than 300 sub-glacial lakes known to exist on the White Continent.Researchers believe Vostok can give them some fresh insights into the frozen history of Antarctica.They also hope to find microbial lifeforms that are new to science.”This fills my soul with joy,” said Valery Lukin, from Russia’s Arctic and Antarctic Research Institute (AARI) in St Petersburg, which has been overseeing the project,

“This will give us the possibility to biologically evaluate the evolution of living organisms… because those organisms spent a long time without contact with the atmosphere, without sunlight,” he was quoted as saying in a translation of national media reports by BBC Monitoring.The drilling project has taken years to plan and implement. The lake’s location in the heart of East Antarctic Ice Sheet is one of the most inhospitable places on Earth.It is the place where thermometers recorded the lowest ever temperature on the planet – minus 89C on 21 July 1983.

Vostok Station was first set up in 1956. However, it was only in the 1970s when, with the help of radar, British scientists first started to suspect there might be something underneath all the ice.Further geophysical survey data then established the true scale of the sub-glacial feature.With an area of 15,000 square km and with depths reaching more than 800m, Lake Vostok is similar in size to Lake Baikal in Siberia or Lake Ontario in North America.More than 300 such bodies of water have now been identified across Antarctica. They are kept liquid by geothermal heat and pressure, and are part of a vast and dynamic hydrological network at play under the ice sheet.

Some of the lakes are connected, and will exchange water. But some may be completely cut off, in which case their water may have been resident in one place for thousands if not millions of years. Russian researchers will try to establish just how isolated Lake Vostok has been. If it has been sealed then micro-organisms new to science are very likely to have evolved in the lake.Nonetheless, there will be concerns about introducing contamination, and there have been criticisms of the methods used by the Vostok drilling team.Vladimir Chuprov, from Greenpeace Russia, commented: “There is a set of risks which can damage this relic lake and some of them are connected with polluting the lake with the drilling fluids, as well as other stuff that can get into this unique lake.”

The drilling team counters that is has taken the necessary precautions.The Vostok project is one of a number of similar ventures being undertaken on the White Continent.The British Antarctic Survey (Bas) is hoping to begin its effort to drill into Lake Ellsworth in West Antarctica later this year. An American crew is targeting Lake Whillans, also in the West.”It is an important milestone that has been completed and a major achievement for the Russians because they’ve been working on this for years,” Professor Martin Siegert, the principal investigator on the Bas-Ellsworth project said.

“The Russian team share our mission to understand subglacial lake environments and we look forward to developing collaborations with their scientists and also those from the US and other nations, as we all embark on a quest to comprehend these pristine, extreme environments,” he told AP.The projects are of particular fascination to astrobiologists, who study the origins and likely distribution of life across the Universe.

Conditions in these Antarctic lakes may not be that different from those in the liquid water bodies thought to exist under the surfaces of icy moons in the outer Solar System.Places like Europa, which orbits Jupiter, and Enceladus, which circles Saturn, may be among the best places beyond Earth to go to look for alien organisms. – BBC

US Marines ‘will be moved from Japan’s Okinawa’

US Marines 'will be moved from Japan's Okinawa'