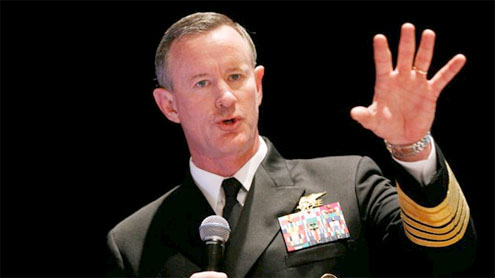 A retired general today assailed the commander of the Navy SEAL raid that killed Osama bin Laden for drawing too much media attention to operations that he argued should be kept under wraps.

Special Operations Commander Adm. Bill McRaven was confronted by retired Lt. Gen. James Vaught, who said he didn’t understand why the recent raids by the Navy SEALs, such as the one to kill Osama bin Laden or to rescue U.S. hostage Jessica Buchanan, were all over the media.”Since the time when your wonderful team went and drug bin Laden out and got rid of him, and more recently when you went down and rescued the group in Somalia, or wherever the hell they were, they’ve been splashing all of this all over the media,” Vaught, 85, said. “I flat don’t understand that.

“Now back when my special operators extracted Saddam [Hussein] from the hole, we didn’t say one damn word about it,” he continued. “We turned him over to the local commander and told him to claim that his forces drug him out of the hole, and he did so. And we just faded away and kept our mouth shut.”Now I’m going to tell you, one of these days, if you keep publishing how you do this, the other guy’s going to be there ready for you, and you’re going to fly in and he’s going to shoot down every damn helicopter and kill every one of your SEALs. Now, watch it happen. Mark my words. Get the hell out of the media,” he concluded, as laughter broke out at a meeting of the National Defense Industrial Association in Washington, D.C.

Vaught commanded the failed mission to rescue the hostages in Iran in 1979. Eight service members died and four were injured in “Operation Eagle Claw” when the helicopters on the mission collided in the remote Iranian desert. Vaught, whose role made him the first commander of Delta Force, was not active duty during the Hussein raid, which was also conducted by the Delta Force, the secretive counterterrorism unit.McRaven jokingly responded that he became a Navy SEAL because his sister was dating a special forces member and because he was infatuated with John Wayne’s movie, “The Green Beret.”

“The fact of the matter is, there have always been portrayals of SOF [Special Operations Forces] out in the mainstream media,” he said. “We are in an environment today where we can’t get away from it. It is not something that we actively pursue, as I think a number of the journalists here in the audience will confirm. But the fact of the matter is, with the social media being what it is today, with the press and the 24-hour news cycle, it’s very difficult to get away from it.”He added that it was difficult to avoid media coverage in today’s 24-hour news cycle and that it could actually help Navy SEALs do their job better.

“We have had a few failures. And I think having those failures exposed in the media also kind of helps focus our attention, helps us do a better job. So sometimes the criticism … the spotlight on us actually makes us better,” McRaven said.The Navy SEALs have received heavy media attention in the past year thanks to the bin Laden raid and the rescue in Somalia. A movie titled “Act for Valor” focusing on the elite special operations force is due for release next month and Academy Award-winning director Kathryn Bigelow is making a movie about the raid that killed the world’s most wanted man.