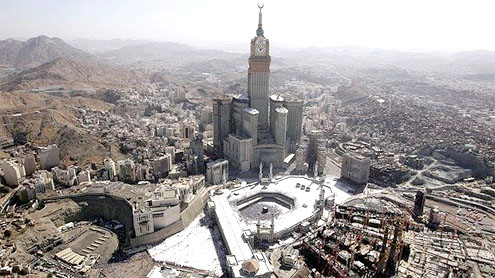 MAKKAH: The General Presidency for the Affairs of the Grand Mosque in Makkah and the Prophet’s Mosque in Madinah will implement a number of projects valued at over SR2 billion at the two holy mosques during the current financial year.

Muhammad bin Nasser Al-Khozaim, deputy head of the presidency, said a total of SR1.76 billion has been earmarked for the implementation of various maintenance, operation and cleaning contracts at the Grand Mosque.Referring to various allocations made in the presidency’s budget for 2011, he said that another SR224 million was set aside for implementing a number of projects.

Speaking to the Saudi Press Agency, Al-Khozaim lauded Custodian of the Two Holy Mosques King Abdullah and Crown Prince Naif, deputy premier and minister of interior, for their utmost keenness in taking care of the affairs of the two holy mosques and making available of the best possible services for the Haj and Umrah pilgrims as well as the visitors to the mosques. He said that the ongoing largest ever expansion in the history of the Grand Mosque will add an additional prayer space for 1.2 million worshippers. The new expansion, named the King Abdullah Expansion, will cover an area of 370,000 sq. meters. – Arabnews