by ToP
in International News
1 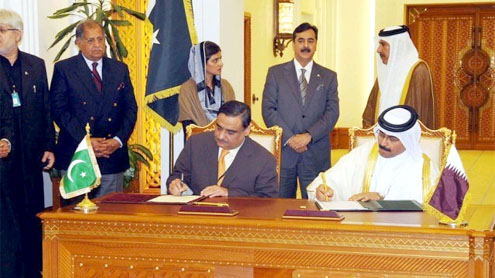 QATAR: Pakistan and Qatar on Monday signed agreements to collaborate in multiple areas, mainly the import of Liquefied Natural Gas (LNG) from the Gulf state and cooperation between the two governments on security.

Pakistan is interested in importing 500 million cubic feet per day of LNG from Qatar that produces 77 million tonnes per annum of LNG. The imported LNG will be initially provided to the power houses in the country to generate 2,500 mega watt of electricity.The Qatar’s minister for energy will be visiting Pakistan later this month to hold talks with the respective ministers to evolve the mechanism of undertaking investment in various sectors which according to the Qatari Prime Minister could go upto five billion dollars.

The MoU on security cooperation between the Interior ministries of Pakistan and Qatar was signed by Foreign Minister Hina Rabbani Khar and Qatar’s minister of state for Interior. Both also inked an agreement on cooperation in legal field between the two governments.The agreement in the field of Auqaf and Islamic Affairs was signed by Minister for Professional and Technical Training Riaz Pirzada.The two countries signed an MoU between Pakistan’s Ministry of Water and Power and Qatar’s Ministry of Energy for cooperation in hydropower development.

Chairman Water and Power Development Authority (WAPDA) Shakil Durrani and Qatar’s energy minister Muhammad Al Saleh Al Saada signed the document.A bilateral agreement was signed on Mutual Administrative Assistance for the Proper Application of Customs Law and Repression, Investigation and Enforcement of Customs Offenses between the governments of Pakistan and Qatar.Pakistan’s ambassador to Qatar Muhammad Sarfraz Ahmed Khanzada signed the document. Both also signed an MoU to cooperate in the field of organizing exhibitions between the two countries. – Thetirbune

Boiler blast: ‘There were no safety measures for workers’

Boiler blast: ‘There were no safety measures for workers’