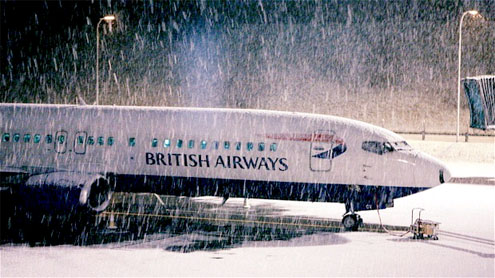 The airport is set for a light dusting of snow, according to the Met Office, with no more than half an inch predicted.

Other forecasters suggested that some light snow could also fall on Friday, which could create problems for departures that evening.With temperatures likely to hover around freezing for much of the week, airports will also have to allow extra time to de-ice aircraft.This alone can add around 30 minutes to the time needed to prepare a plane for departure, which in turn will present a fresh challenge for the airport on one of the busiest weekends of the year with 90,000 passengers expected to fly away on Saturday.

Other airports further north, such as East Midlands, Birmingham and Manchester may see around just under and inch with Leeds, Manchester and Edinburgh facing the prospect of slightly more. While Heathrow said it was confident that it will be able to cope with the next batch of snow, its performance over the weekend which saw half the flights cancelled as a result of three inches of snow falling triggered fears of a tricky weekend.

Given that Heathrow is effectively full, operating at more than 99 per cent capacity, any weather disruption poses at the very least a threat of significant delays.Heathrow, which is owned by Spanish owned Ferrovial, will be watching the weather forecast closely.Should the weather forecast worsen, Heathrow will have to decide whether to implement its “snow timetable”.This would entail cancelling a percentage of flights to give the airport breathing space to enable it to contain the disruption to as short a time as possible.

Last weekend, Heathrow scrapped 30 per cent of services before a snowflake fell. A further per cent of flights were cancelled on the day, as fog settled on the airport as well.“We are watching the weather closely,” a Heathrow spokesman said. “We are working with our forecast providers to get an accurate picture as possible over this week over how much snow, if any, we should expect.“Passengers should check their flight status with their airline before travelling to the airport.”

A Met Office spokesman said: “Heathrow could see some slight flurries, if it does fall it is likely we would settle. But there is little chance that it will be enough to cause major disruption.”Meanwhile the Weather Channel was more pessimistic, predicting light snow over Heathrow on Friday and further showers on Saturday. – Thetelegraph