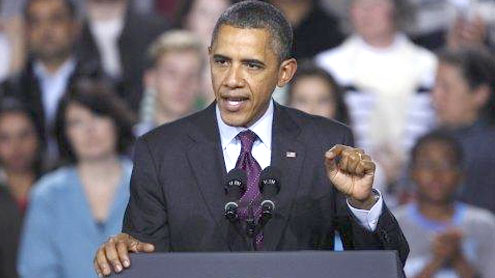 Barack Obama has opened up a six-point lead over his nearest Republican rival, boosted by the recovering US economy, falling unemployment and negative reaction to Republican primary contest, a new poll has shown.

If the presidential election was held now, Mr Obama would win 51 per cent of votes, ahead of 45 per cent for Mitt Romney, the Republican frontrunner, according to the ABC/Washington Post survey.It is the first time that any contender has broken the 50 per cent barrier in months. “I deserve a second term, but I am not done,” said Mr Obama. “We’ve created 3.7 million jobs in the last 23 months. We’ve created the most jobs since 2005, the most manufacturing jobs since 1990, but we’re not finished.”Mr Romney leads the Republican field after winning the Nevada caucuses over the weekend with 50 per cent of the vote, but the poll showed that the former management consultant was still failing to connect with ordinary voters.

Mr Romney appears to have been damaged by being forced to disclose that he paid 14 per cent tax on his income of $22 million (£13.9 million) in 2010, with 66 per cent of voters polled saying they believed he was “not paying his fair share”.Fairness has been a central message of Mr Obama’s election platform, promising to raise taxes on millionaires such as Mr Romney, who last week handed his detractors further ammunition after saying he was “not concerned” about the poor. Many independent voters in swing states remain undecided. While Republicans have dismissed Mr Obama’s policies as class warfare, the poll showed that 72 per cent of voters, including many Republicans, favoured raising taxes on millionaires.

Polls also claim that Mr Romney is failing to shake off the tag of elitism, with 53 per cent saying they felt Mr Obama understood the economic problems of ordinary voters, compared with 36 per cent for Mr Romney.Despite his weaker showing among the broader electorate, Mr Romney remains the odd-on favourite to claim the Republican nomination for November’s election, as the primary races move to Colorado and Minnesota.Mr Romney continues to have difficulty energising conservative base, where the former House speaker Newt Gingrich and Rick Santorum, the ultra-religious former Pennsylvania senator, enjoy support.

Early polls in Minnesota showed Mr Santorum running neck-and-neck with Mr Romney, in a further sign that Mr Gingrich’s campaign is starting to fade after a suffering bad defeat in Florida and giving another angry and erratic performance in Nevada.Mr Santorum continues to claim that he is the natural choice of conservatives. “We have two candidates that are flawed. If you look at Florida and Nevada, the results were down as far as participation is concerned,” he told Fox News. – Thetelegraph