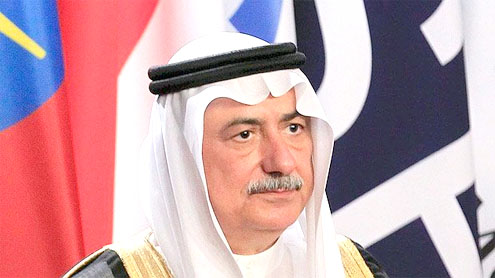 DAVOS: Finance Minister Ibrahim Al-Assaf said on Thursday that supply to global oil markets was “adequate” and that he was comfortable with oil prices at their current level.

“Our long-standing policy is to have stability and that’s why we’ve always provided excess capacity for the market and we’ve been there during growth, during all kinds of events in the market. And in my view the supply is adequate at this point.” Al-Assaf said Saudi Arabia did not like very high prices. Asked on CNBC television if he was comfortable with crude at around $100 he said: “I’m comfortable with that, as a finance minister, yes.”

Algeria said Thursday it will not boost crude oil exports in the event Iran suddenly cuts supplies to Europe after the EU imposed new sanctions. “We have a program in place that won’t be modified,” Energy Minister Youcef Yousfi told Algerian news service APS.Also Thursday, Canadian Prime Minister Stephen Harper said Canada is very concerned about the economic problems facing Europe and the United States and fears they could become even more severe in future.

Harper told the forum that the uncertain international outlook meant he would focus on boosting the Canadian economy by cutting red tape as well as slowing the growth of spending.Canada is particularly impatient with what it sees as foot-dragging by euro zone countries and has urged Europe to do what it takes to solve its debt crisis.”We remain very concerned about the continuing instability of the global economy,” Harper said in the prepared copy of remarks to a Davos audience. – Arabnews