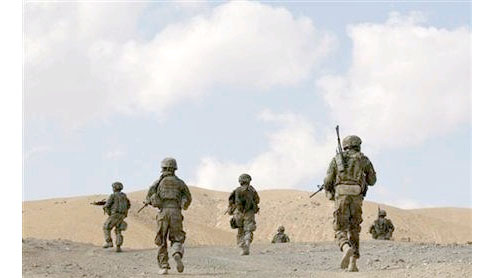 KABUL/WASHINGTON: A video showing what appears to be American forces urinating on dead Taliban fighters prompted anger in Afghanistan and promises of a U.S. investigation on Thursday but the insurgent group said it would not harm nascent efforts to broker peace talks.

The video, posted on YouTube and other websites, shows four men in camouflage Marine combat uniforms urinating on three corpses. One of them jokes: “Have a nice day, buddy.” Another makes a lewd joke.Afghan President Hamid Karzai condemned the video, describing the men’s actions as “inhuman” and calling for an investigation, in a statement on Thursday.U.S. Defense Secretary Leon Panetta telephoned Karzai to denounce the actions in the video as “deplorable” and to say it would be investigated immediately, the Pentagon said. General Martin Dempsey, the top U.S. military officer, said actions depicted in the video were illegal.

The U.S. military has identified two of the four Marines in the video so far, a Marine Corps official told Reuters, adding the Marine Corps believed the images were authentic.But the Pentagon stopped short of offering an official confirmation that the video was real and Panetta said there was not yet a “firm conclusion” on the matter.The video is likely to stir up already strong anti-U.S. sentiment in Afghanistan after a decade of a war that has seen other cases of abuse. That could complicate efforts to promote reconciliation as foreign troops gradually withdraw.”Such action will leave a very, very bad impact on peace efforts,” Arsala Rahmani, a senior member of the Afghan government‘s High Peace Council, told Reuters.

The administration of U.S. President Barack Obama, seeing a glimmer of hope after months of efforts to broker talks, is launching a fresh round of shuttle diplomacy this weekend.Marc Grossman, Obama’s special representative for Afghanistan and Pakistan, will fly into the region for talks with Karzai and top officials in Turkey, Saudi Arabia and the United Arab Emirates.One immediate goal is to seal agreement for the Taliban to open a political office in the Gulf state of Qatar.Despite concerns when the video emerged that it would not help efforts to build confidence among the warring parties, a Taliban spokesman said although the images were shocking, the tape would not affect talks or a possible prisoner release.

“We know that our country is occupied,” he said. “This is not a political process, so the video will not harm our talks and prisoner exchange because they are at the preliminary stage.”Panetta said he had ordered the Marine Corps and the commander of the NATO-led International Security Assistance Force in Afghanistan to investigate and said anyone found responsible will be punished.”The danger obviously is this kind of video could be misused in many ways not only to undermine what we are trying to do in Afghanistan but undermine the potential for reconciliation. There is a danger there,” Panetta told reporters on a trip to Texas.”But I think if we move quickly – if we conduct this investigation and hold these people accountable – we send a clear signal to the world that the U.S. is not going to tolerate that kind of behavior and it doesn’t represent the United States as a whole.”

General James Amos, the commandant of the Marine Corps, said in a statement the video “apparently depicts Marines desecrating several dead Taliban in Afghanistan.”He said he had asked the Naval Criminal Investigative Service to examine the incident and had set up another internal inquiry headed by Marine officers.A Marine officer, speaking on condition of anonymity, told Reuters that all of the Marines in question were believed to be from the 3rd Battallion, 2nd Marines, which is based in Camp Lejeune, North Carolina, at the time of the incident.That unit served in Afghanistan from March to September 2011, the official said.

White House spokesman Jay Carney said he was not aware of whether President Barack Obama had seen the video.News of the footage had yet to spread in Afghanistan – a country where a minority has access to electricity and the Internet is limited to a tiny urban elite – but Afghans who were told about what the tape appears to show were horrified.”It may start with just video footage but it will end with demonstrations around the country and maybe the world,” said 44-year-old Qaisullah, who has a shop near Kabul’s Shah-e-dushamshera mosque.Anti-American feeling has boiled over, or been whipped up, into violence several times in Afghanistan in recent years. Protests over reports of the desecration of the Muslim holy book have twice sparked deadly riots.

The tape also sparked anger across the Middle East and in Internet chatrooms, prompting reference to earlier scandals involving U.S. soldiers’ treatment of prisoners in Iraq and the killing of unarmed civilians in Afghanistan.”This is the embodiment of the strong assaulting the weak. It’s nothing new for the Americans, it only adds to what they have done in Abu Ghraib prison. This a breach of the sacredness of Islam and Muslims,” said Othman al-Busaifi, 45, in Tripoli.

The U.S. military has been prosecuting soldiers from the Army’s 5th Stryker Brigade on charges of murdering unarmed Afghan civilians while deployed in Kandahar province in 2010 and cutting off body parts as war trophies.”They cut off ears and fingers and keep them as medals, and urinate on bodies, then they talk about civilization,” wrote user Abu Abdullah al-Janubi on one forum.The video was released at a critical time for what U.S. officials hope might become authentic talks on Afghanistan’s political future.

In Kabul, Grossman will seek approval from Karzai – whose support for a U.S. effort he fears will sideline his government has wavered – to move ahead with good-faith measures seen as an essential precursor to negotiations that could give the Taliban a shared role in governing Afghanistan.The diplomatic initiative includes a possible transfer of Taliban prisoners from the U.S. military detention camp at Guantanamo Bay, Cuba.A breakthrough would mark a milestone for the Obama administration, struggling to secure a modicum of stability in Afghanistan as it presses ahead with its gradual withdrawal from a long and costly war. The United States and its allies aim to withdraw combat troops by the end of 2014.