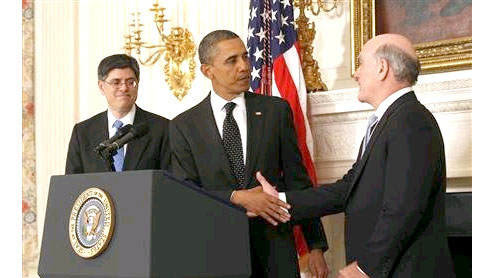 The switch at the top of the White House power chain comes as Obama prepares for a tough re-election battle that will require support from his left-leaning base.Daley, who as chief of staff was Obama’s top aide, was unpopular with that base, which saw him as too close to big business and too soft on Republicans.Lew, director of the White House budget office since November 2010, is well-versed in congressional politics and has stronger relations with Democrats on Capitol Hill.

Obama told reporters that Daley had approached him about resigning last week. The president said he did not accept the offer at first, asking Daley to think it over.Daley decided it was time to return to his native Chicago. He will take on a volunteer role as one of several co-chairs of Obama’s re-election campaign, which is based there.”There is no question I’m going to miss having Bill at my side at the White House,” Obama said. “I plan to continue to seek Bill’s counsel in the months and years to come.”

Daley’s departure reflects a shift in White House strategy that has been months in the making.The former commerce secretary came in last year with a mandate to improve relations with the business community and with congressional Republicans.Relations with both groups remained rocky, however, and Obama adopted a harder edge against Republicans in the fall after acrimonious negotiations to increase the U.S. debt ceiling brought the country to the brink of default.

The new White House strategy casts Obama as a champion of the middle class running for re-election in November against obstructionist Republicans in Congress. It leaves little room for the kind of conciliation that was part of Daley’s original mandate.”Daley was brought in in part to preside over a strategy that I think was very well intentioned but that simply didn’t pan out,” said Brookings Institution fellow William Galston.

“If the name of the game from … now through the election is executing a sharply partisan strategy, then you could argue that someone who doesn’t have rich and up-to-date relationships with senior Democrats in Congress might not be the best person to execute the strategy,” Galston said.Lew, who served as budget director under President Bill Clinton and was a deputy to Secretary of State Hillary Clinton, is well liked on Capitol Hill. He was instrumental in negotiating a debt ceiling deal with Republicans last year.

“Lew has great relationships on the Hill and it’s virtually impossible to see him making the same mistakes his predecessor did,” said one senior Democratic congressional aide.The aide said many Democratic lawmakers had felt Daley was more interested in cutting deals with Republicans than protecting their concerns.Daley handed over day-to-day White House management duties in November to another Obama aide, Pete Rouse, setting the stage for his resignation two months later. He was in the job for roughly a year.

Lew’s management skills and calm demeanor are prized within the Obama administration. The soft-spoken 56-year-old manager fits in with the “No Drama Obama” attitude the White House and Obama’s presidential campaign like to project.Daley will stay in his job through Obama’s State of the Union address on January 24, an official said. The White House declined to name possible replacements for Lew, whose successor will need congressional confirmation.

That could be tricky.The president’s decision last week to bypass Congress and install Richard Cordray as head of the Consumer Financial Protection Bureau riled Senate Republicans, who could make it hard for Obama to win Senate approval of a new budget chief.ne analyst said the timing of Obama’s announcement on Monday was convenient while the public remained focused on the Republican presidential nominating battle.”This is a good time for a shake-up, since public attention is focused on the GOP, thereby diminishing the chances this will become a story about unrest in the White House,” said Princeton University history professor Julian Zelizer. – Yahoonews