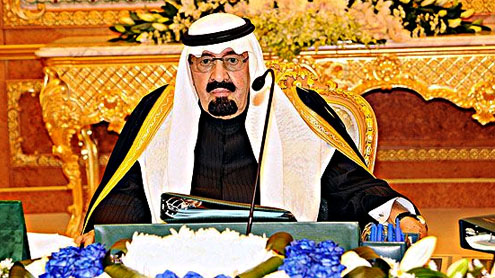 The Cabinet, chaired by Custodian of the Two Holy Mosques King Abdullah, said the Kingdom viewed oil embargoes imposed by certain countries (on Iran) as their internal matters.It also stressed that the Kingdom’s oil sales are done purely on a commercial basis through deals reached by Saudi oil companies and foreign firms that purchase Saudi oil.The Cabinet thanked the Indian government for its decision to lift a 6.5 percent anti-dumping duty imposed on polypropylene imported from Saudi suppliers, including Saudi Basic Industries Corp.

“It also expressed its satisfaction over the cooperation offered by the Indian side to solve this problem in a way that satisfies both sides,” said Social Affairs Minister and Acting Culture and Information Minister Yousuf Al-Othaimeen.Meanwhile, King Abdullah received the chairman and top officials of SABIC at his palace on Monday and commended the company’s contributions to the country’s economic growth.

The Cabinet also reviewed the announcement of the national budget for 2012 that projected expenditure at SR690 billion. The budget aims at achieving sustained and balanced development and creating more jobs for young Saudi men and women. “King Abdullah urged the ministers to implement the budget carefully in order to enhance the Kingdom’s progress and prosperity,” Al-Othaimeen said.

The Cabinet also expressed its satisfaction over the payment of unemployment allowance to more than 500,000 Saudi jobseekers. King Abdullah has emphasized the need to find quick and effective solutions to solve the unemployment problem among Saudis.Referring to the situation in Syria, the Cabinet welcomed the decision taken by the Arab ministerial committee urging the Syrian government to implement all its assurances on the basis of a protocol signed with the Arab League, and ensure protection of the country’s civilians. The Cabinet also condemned the terrorist attacks in Damascus and Iraq.

Al-Othaimeen said the meeting also welcomed the Palestinian-Israeli peace talks in Jordan and described it as a positive development. It commended the Jordanian government for holding the meeting.The Cabinet endorsed two agreements with Qatar for cooperation in civil defense and combating illegal drug trade. It also approved the memorandum of understanding signed between Darat King Abdul Aziz and Isa Cultural Center in Bahrain as well as the framework agreement for economic, commercial, investment and technical cooperation between the GCC and Malaysia.

The Cabinet also took a number of decisions to organize administrative aspects of the General Authority of Civil Aviation (GACA), which has been separated from the Ministry of Defense.It said GACA’s chairman would be the chairman of Saudi Arabian Airlines. GACA will be an independent organization in terms of finance and administration and is brought under the prime minister. The Cabinet will have the power to change the authority’s headquarters from Jeddah to any other place in the Kingdom. GACA’s board of directors will be composed of its chairman, deputy chairman, representatives from the finance and transport ministries, three persons representing government departments and three persons from the private sector.

The Cabinet changed Article 1 of Saudia’s law. “The General Organization of Saudi Arabian Airlines is an independent organization enjoying legal personality and is linked organizationally with the prime minister. Its headquarters will be in Jeddah and the Cabinet can change its headquarters to another place in the Kingdom.”Saudia’s board of directors will be reconstituted as follows: GACA chief will be its chairman while its members are the Saudia director general, four representatives from government departments and five persons representing the private sector.  Saudia’s director general will be appointed by a royal decree on the recommendation of the GACA chairman. – Arabnews

The Cabinet authorized Finance Minister Ibrahim Al-Assaf to hold talks with countries with which the Kingdom has signed agreements for the avoidance of double taxation and tax evasion to change the article related to exchange of information.