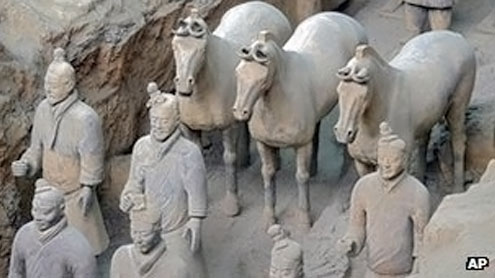 China says about 44,000 ancient ruins, temples and other cultural sites have disappeared.

That’s the conclusion of the country’s first heritage census for more than 20 years.About a quarter of the sites that remain are in a poor state of repair.Explaining the results, an official quoted by Chinese state media said many such sites were unprotected and had been demolished to make way for construction projects.The census, carried out by China’s State Administration of Cultural Heritage, recorded the registration of 700,000 heritage sites.

Liu Xiaohe, deputy director of the survey, told state media that economic construction was the most important reason for the damage to cultural relics.In the worst-affected region, Shaanxi province, which is the home of the terracotta warriors, the statistics indicate that more than 3,500 cultural sites have vanished.No specific buildings or monuments were named in the census.

Correspondents say that even the iconic Great Wall of China has been threatened by erosion and unauthorised development, as conservation rules are flouted by hikers and exploited by local villagers who charge their own admission fees.Two years ago a Qin Dynasty part of the Great Wall was said to have been damaged by miners who knocked holes in it while prospecting for gold. – BBC